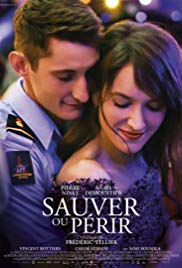 Storyline:
The heartbreaking hero’s journey and true story of a Paris fireman, husband and dad.
User Reviews: Pierre Niney is one of my favorite French actors at the moment. At age 21 he became the youngest resident actor ever at the Comedie Francaise. In the last few years he has captured the attention of cinema lovers and I found him superb in his roles in ‘Frantz’ and ‘Promise at Dawn’. Seeing him in the lead role in ‘Sauver ou perir’ (or ‘Through the Fire’ as the English title goes) is the main reason I chose to see this movie, which otherwise is quite far from any of my favorite genres.

Undoubtedly, ‘Sauver ou perir’ starts from the best of intentions. It describes the life of the ‘sapeurs-pompiers’ (emergency teams providing medical and fire fighting services) in Paris in details that prove an excellent documentation. It has a declared patriotic and heroic flavor without making any excuse, and those who resonate at ‘La Marseillese’ have the opportunity to hear it a few times. When the main hero is hurt in a tragic accident, it brings on the screen an emotional story of the confrontation of a couple of young and beautiful people with an adverse destiny. Melodrama and rhetoric are not avoided.

Unfortunately, in cinematography, good intentions do not always result in good movies. Director Frédéric Tellier’s film fails to overcome the level of a docudrama. What rescues it somewhat is Pierre Niney’s acting, which pulls out everything he can get of the role ofs a young hero dedicated to his job, forced to face his own mortality, the physical limitations imposed by the accident, the crisis through which his marriage passes. Eventually, ‘Sauver ou perir’ confirmed both my fears and my expectations. It did not manage to overcome the limitations of the genre, but provided another excellent acting performance by Pierre Niney.