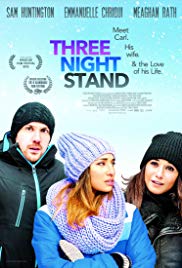 Storyline:
A married couple’s romantic weekend is turned upside down when the husband’s ex-girlfriend, a woman he’s secretly obsessed with, is running the ski lodge where they’re staying.
User Reviews: Married couple Carl (Sam Huntington) and Sue (Meaghan Rath) is having an awkward sex ski weekend. He is shocked to find his ex Robyn (Emmanuelle Chriqui) running the ski lodge. She had left her life and bought the place. Carl reveals to Sue that he had dated Robyn. In desperation, he calls his friend Stacey (Reagan Pasternak) who drives up with her boyfriend.

It’s a passable dysfunctional rom-com comedy indie up to a certain point. When Carl goes off the deep end, the reason to care goes out the window. He’s acting like an idiot and I stop caring about him. The comedy is a bit flimsy up to that point. After that point, it’s problematic with its unwelcome destination. The dysfunction is no longer fun and I don’t feel the love. The long and short of it is that I don’t like Carl.

Storyline:When Frankie Baldwin and Nate Deluca both have a claim to ownership of Sorrento Farm, they are forced to divide the vineyard right down the middle and work the fields alongside each other to bring in the har...

Storyline:When librarian Taylor Harris suddenly loses her job, she moves back to her small hometown in Montana, where she gets involved in helping save her brother's small-town hotel from tycoon Joel Sheenan, who want...

Storyline:Sarah, upon accidentally discovering time travel through the use of a drug, must now travel back one year into the past to save her son from a fatal accident.User Reviews: