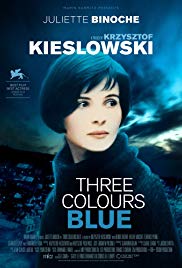 Storyline:
The first part of Kieslowski’s trilogy on France’s national motto: Liberty, Equality, and Fraternity. ‘Blue’ is the story of Julie who loses her husband, an acclaimed composer and her young daughter in a car accident. The film’s theme of liberty is manifested in Julie’s attempt to start life anew, free of personal commitments, belongings, grief or love. She intends to numb herself by withdrawing from the world and living completely independently, anonymously and in solitude in the Parisian metropolis. Despite her intentions, people from her former and present life intrude with their own needs. However, the reality created by the people who need and care about her, a surprising discovery and the music around which the film revolves heal Julie and draws her back to the land of the living.
Written by
Anonymous
User Reviews: "Three Colors Blue" is the first part of Polish director Krzysztof Kieslowski’s Three Colors trilogy "Blue" is set in France, "White" in Poland and "Red" in Switzerland, but all production was based in France Not only are the colors of the trilogy those of the French national flag; the original intention was meditation on the ideals of the French Revolution: freedom, equality and fraternity This suggests a political dimension to the work But though like most Polish filmmakers Kieslowski had his difficulties with the Polish Communist system, its collapse by the early 1990s meant that he was not only free to work where he pleased, but liberated from the necessity for his films to engage directly in the political process

In "Three Colors Blue" Juliette Binoche plays a woman whose husband and daughter are killed in a car crash Overcome by melancholy, she progressively withdraws from life, depriving herself of possessions and refusing relationships, a state of mind conveyed in part by the director’s subtle use of color blue But eventually she is able to accept the attentions of a lover and even to offer friendship to another woman who is pregnant with her husband’s child Finally, she completes the piece of music which her husband has been commissioned to write

The result is a work that has less in common with the Polish ‘Cinema of moral concern’ of the late 1970s than with the tradition of the mainstream European art cinema, in its concerns with alienation and the loss of feeling, countered by the transcendent power of love

Storyline:Nick and Ruben are hoodwinked into a "shootfighter" (no-holds-barred, to the death) martial arts match by the evil Mr. Lee, who has a grudge against world shootfighter champ(and teacher of Nick and Ruben) Sh...

Storyline:Jonathan Younger, a slick, cool and flashy owner of a self-storage business loves two things the most. His job - and female customers. His hardworking common-looking wife and business partner Penny does not ...

Storyline:A mummy returns from the dead and becomes obsessed with a woman which he thinks is the reincarnation of his dead lover.User Reviews: Well, one of the very worst. At least this movie has no aliens. That the o...