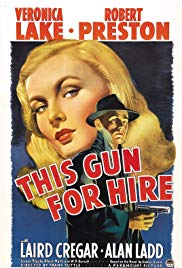 Storyline:
Hit man Philip Raven, who’s kind to children and cats, kills a blackmailer and is paid off by traitor Willard Gates in “hot” money. Meanwhile, pert entertainer Ellen Graham, girlfriend of police Lieut. Crane (who’s after Raven) is enlisted by a Senate committee to help investigate Gates. Raven, seeking Gates for revenge, meets Ellen on the train; their relationship gradually evolves from that of killer and potential victim to an uneasy alliance against a common enemy.
Written by
Rod Crawford <[email protected]>
User Reviews: This is definitely an enjoyable film to watch. It starts out like gangbusters with great film noir qualities having the trajectory of a bona fide classic. Alan Ladd is superb as the cold-blooded killing man for hire and Laird Cregor – who unfortunately was to die at 30 only two years after this film – is equally superb in his role. The film misses the mark, however, when the patriotic aspects of World War II (then a current event) are used in the end to appeal to the conscious of the cold-blooded killing Ladd. For a character of Ladd’s ilk to be won over on such a near-corny patriotic appeal is a bit of a stretch, and takes away from the true grit realism of the movie’s potential. Sort of reminds me of all the romance and self-righteousness that frequently is the focus of movies or intellectual discussions of the U. S. Civil War, rather than simply telling the true plain cold-blooded reasons for its initiation and declaration, regardless of how evil, and immoral the facts. But alas, Hollywood is about entertainment, not necessarily realism. And, we can’t forget the near-mandatory Studio happy-ending requirements.

On a lighter note, those with an ear for a good tune with their flicks will enjoy two Frank Loesser compositions in the film, particularly "Now you see it, Now you don’t," where Veronica Lake does an excellent job lip-synching Martha Mears’ vocal.