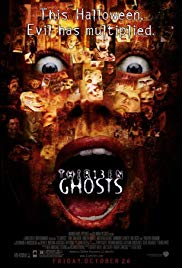 Storyline:
Arthur and his two children, Kathy and Bobby, inherit his Uncle Cyrus’s estate: a glass house that serves as a prison to 12 ghosts. When the family, accompanied by Bobby’s Nanny and an attorney, enter the house they find themselves trapped inside an evil machine “designed by the devil and powered by the dead” to open the Eye of Hell. Aided by Dennis, a ghost hunter, and his rival Kalina, a ghost rights activist out to set the ghosts free, the group must do what they can to get out of the house alive.
Written by
ahmetkozan
User Reviews: This is a chiller remake with grisly horror, genuine chills and shocks . When Cyrus Kriticos (F. Murray Abraham) , a very rich collector of unique things dies, he leaves it all to his nephew and his family. All including his house, his fortune, and his malicious collection of ghosts. As reclusive Dr. Zorba has died and left his eerie mansion to his penniless nephew Cyrus Zorba (Tony Shaloub) and his sons (Shannon Elizabeth , Alec Roberts) . Along with the house, the Zorba family has also inherited the occultist’s collection of 12 ghosts (Laura Mennell as The Bound Woman , Kathryn Anderson as The Withered Lover , Craig Olejnik as The Torn Prince , Shawna Loyer as The Angry Princess , Xantha Radley as The Pilgrimess , Ernst Harth as The Great Child , Laurie Soper as The Dire Mother , Herbert Duncanson as The Hammer), who can only be seen through Zorba’s special goggles.The house suddenly closes itself and they encounter trapped inside and soon supernatural creepiness begin frightening the hosts . Then they’ll spend a ghastly night in the spooky house with killings-laden history . The family members, their lives at risk upon the discovery a strange book that lies hidden somewhere in the house , they receive aid from unexpected woman (Embeth Davidtz) as the threat to their lives is revealed .

This eerie story contains bit good fun with grisly killing , relentless horror and lots of blood and gore. The chiller version packs genuine chills and terrifying deaths such as a horrible quartering . It’s silly but amusing fun and with an excessive use of computer generator FX and special make-up in charge of Robert Kurtzman , Howard Berger and Greg Nicotero . The monstrous ghosts are the real stars of this production , being rightly realized by means of an excellent make-up and magnificent special effects . Some scenes are clumsily shot but the movie has some good moments here and there , the illogical parts in the argument are more than compensated for the excitement provided by the creepy ghosts . The film was lavishly produced by Dark Castle , production specialized on terror genre and in charge of Joel Silver , Robert Zemeckis and Gilbert Adler ; both of them have produced successful terror movies dealing with eerie tales about horror , grisly killings and lots of blood and gore such as ¨House of haunted hill¨, ¨Return to house of haunted hill¨ , ¨Gothika¨, ¨Ghost ship¨, ¨House of wax¨ , Whiteout¨ , ¨Splice¨ , ¨The reaping¨ , ¨Orphan¨ , among others . The motion picture was professionally directed though without originality by Steven Beck who subsequently filmed ¨Ghost ship¨.

The film resulted to be an acceptable but inferior remake from superior ¨13 ghosts¨ by William Castle . It was plenty of gimmicks, leaps from the screen and surprises descending on cinema-goers such as hidden wires and others . Of course the biggest film about this astonishing story is this vintage 1960 classic version rendition by William Castle that was starred by Charles Herbert as Buck Zorba , Jo Morrow as Medea Zorba , Martin Milner as Benjamen Rush , Rosemary DeCamp as Hilda Zorba and Donald Woods as Cyrus Zorba .