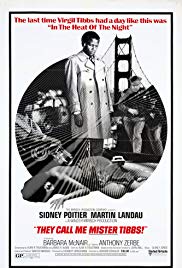 An inferior follow-up that has action , suspense , drama , thrills , violence and intriguing finale . This packs the further adventures of the role Tibbs/Sidney Poitier created for the film ¨In the heat of the night¨ . The picture turns out to be slow , boring and it has dated one bit . The movie is realized in Television style , though contains some exciting chase sequences , pursuits and surprising ending . Here Sidney Poitier reprises his ordinary character , giving nice acting . Remaining cast is frankly well such as : Anthony Zerbe , Beverly Todd , Juano Hernandez , Jeff Corey , Norma Crane , David Sheiner , Edward Asner who wears a full toupee for his part and special mention for Martin Landau . Atmospheric cinematography and excellent music score by Quincy Jones in his usual style .

The trilogy starts with the excellent ¨In the heat of the night¨ (1967) that won 5 Oscars , in which Tibbs joins forces with redneck sheriff who grudgingly accepts helps in resolve a bizarre killing , being directed by Norman Jewison , it stars Rod Steiger , Warren Oates , Lee Grant , Anthony James . The second installment is this ¨They called me Mister Tibbs¨ (1970) . And the third and final appearance , ¨The organization¨(1971) , by Don Medford with Barbara McNair , Shree North , Raul Julia , Ron O’Neal , Allan Garfield and Daniel J Travanti , in which Tibbs/Sidney Poitier is out to break up a ring of dope smugglers .

The motion picture was middlingly directed by Gordon Douglas . This is one of various and professional works of his long career as filmmaker . He was a Hollywood veteran director, directing early movies such as ¨Little rascals¨, ¨Spanky¨. He was an expert on adventures genre as ¨Black arrow¨ and ¨Fortunes of Captain Blood¨ , both starred by Louis Hayward ; but he’s mainly specialist filmmaking Western , his first was ¨ Girl rush (1944)¨ and in the 40s directed ¨Doolins of Oklahoma¨ and ¨The Nevadan¨ for duo Harry Joe Brown-Randolph Scott , as well as Wartime genre as ¨Up periscope¨. He went on directing Alan Ladd’s vehicles as ¨Iron Mistress¨ and ¨The fiend who walked west¨ which resulted to be a Western rendition to ¨Kiss of death¨. In the 50s he proved his specialty on Western in the films starred by Clint Walker as ¨Fort Dobbs¨ ,¨Yellowstone Kelly¨, ¨Gold of seven Saints¨ and about legendary bandits as ¨Doolins of Oklahoma¨ and ¨Great Missouri raid¨ . After that , he filmed ¨Chuka¨ (1967) that bears remarkable resemblance to ¨Only the valiant¨ , the remake ¨Stagecoach (1966)¨ , and the superior ¨Rio Conchos¨. Douglas usually worked for Frank Sinatra in various films such as ¨Lady in Cement¨, ¨Tony Rome¨, ¨The detective¨ , ¨Robin and the 7 Hoods¨. Rating : 5,5 Passable and acceptable . The flick will appeal to Sidney Poitier fans .