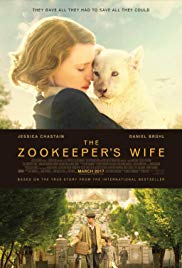 Storyline:
War brews over Warsaw in 1939, and while life is still running its course, the Germans are slowly beginning to make their presence felt, with Hitler secretly preparing for the German invasion of Poland. Under those circumstances, the young couple of Jan and Antonina Zabinski continue their daily routine as owners and keepers of the Warsaw Zoo, but soon, as German Luftwaffe’s Stukas hammer the Polish capital, their life’s work together with the city, will turn to ashes. However, with the zoo liquidated for the war effort and many of its animals tragically perished, what was once an animals’ zoo, will now serve as a sanctuary where Antonina, the humanist veterinarian, and Jan can hide the persecuted Polish Jews in plain sight until safe houses are found. That was Jan and Antonina’s formidable, yet perilous plan, who regardless of the consequences, refused to wither before the Nazi menace, took matters into their own hands and sheltered 300 Jews under the Germans’ noses.
Written by
Nick Riganas
User Reviews: A film with promising actors and based upon an incredible true story, however didn’t fill up to its high expectations, sadly.

Something that always troubles me, is feeling the need to speak English with an accent to show that they’re actually speaking another language. It’s in fact ridiculous, knowing that Johan Heldenbergh is pure Belgian (and actually speaks English with a Flemish/Ghent accent) and Jessica Chastain is pure American (her English/polish accent is just ridiculous). Either you just speak plain English or you make the movie with Polish actors. Besides that, Johan Heldenbergh, the zookeeper, (world-renown in Belgium but his first introduction in a bigger US production), was impeccable & perfectly casted.

The film didn’t blow me away and was predictable from beginning till the end. Fairly enjoyable for a regular weeknight if you have nothing to do, but will most certainly be forgotten the next day – not anywhere near classic holocaust movies like Schindler’s list or The Pianist. Too bad, cause everything was there (especially book & script) to make a much stronger impact.

Storyline:In 1981, young Issei Sagawa of Japan murdered a Dutch student in Paris and ate part of his body. Declared mentally ill, he did not face a normal trial, and after spending two years in a French clinic, he ret...

Storyline:A woman at the age of 50 moves back in with her parent after her husband leaves her for a younger woman.User Reviews: For Marie-Francine the life is quite hard: her husband left her and she has to go back to...