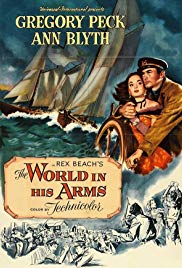 Storyline:
Roistering sea captain Jonathan Clark, who poaches seal pelts from Russian Alaska, meets and woos Russian countess Marina in 1850 San Francisco. Events separate them, but after an exciting sea race to the Pribilof Islands they meet again; now, both are in danger from the schemes of villainous Prince Semyon.
Written by
Rod Crawford <[email protected]>
User Reviews: Sometimes you just want to watch real adventure and romance and escape. TWWIHA is that and more, shot in Technicolor and full of character and characters this is escapist melodrama at its best.

Gregory Peck plays the Boston Man, a sailor and a sealer, who lands in port and finds love unexpectedly with a Russian countess. Set against the politics of the purchase of Alaska the film spends the first hour in port and then follows 20 minutes of the best sailing sequences caught on film: two tall masters sailing fullspeed and captured to great effect on film, with gaff sails, bumkins, and bowsprits furling this is one of my favorite sailing scenes from any film.

All in all, this is a wonderful romantic adventure film and a terrific way to spend a rainy afternoon.