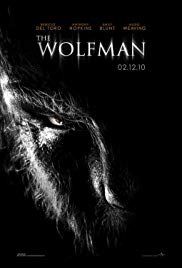 Storyline:
Lawrence Talbot’s (Benicio Del Toro’s) childhood ended the night his mother died. His father sent him from the sleepy Victorian hamlet of Blackmoor to an insane asylum, then he goes to America. When his brother Ben’s (Simon Merrells’) fiancée, Gwen Conliffe (Emily Blunt), tracks him down to help find her missing love, Talbot returns to his father’s estate to learn that his brother’s mauled body has been found. Reunited with his estranged father Sir John Talbot (Sir Anthony Hopkins), Lawrence sets out to find his brother’s killer, and discovers a horrifying destiny for himself. Someone or something with brute strength and insatiable blood lust has been killing the villagers, and a suspicious Scotland Yard Inspector named Aberline (Hugo Weaving) comes to investigate.
User Reviews: In contrast to the belief and the whine of many critics, there is an audience out there for dark, gritty and atmospheric werewolf movies such as ‘The Wolfman’. I will, however, not go into detail and debunk critic reviews. Instead, I’ll try to be brief and express my own feelings towards this film.

This movie is an instant horror classic. It has everything a werewolf fan would want: Gore, blood, atmosphere, great soundtrack, great looking werewolf and good actors. This movie is not like ‘The Wolfman’ from 1941. Instead, the makers went ALL-IN with this interpretation and really exemplified what’s in our deepest fantasies: Intense werewolf-action. This movie doesn’t try to be original in any way. What it does, however, is to take a basic story, a basic concept and develop it in an interesting way. This movie doesn’t have any werewolves that are cute and look like wolves (See: Twilight). In that way, it manages to break the monotony of modern horror movies (ghost movies or torture movies). This is a RATED R, Universal monster film that should be taken for what it is: A tense adrenaline rush through the werewolf lore with great effects. This, my friends, is a movie FROM HORROR LOVERS to HORROR LOVERS.