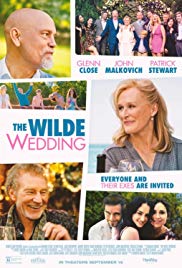 Storyline:
A retired film star’s wedding to her fourth husband brings chaos when their families (and her ex-husband) show up for the festivities.
User Reviews: This film tells the story of a seasoned actress, who is remarrying a man. Their families and ex spouses all converge for a weekend of wedding events, but things do not turn out as planned.

As with any film work a big cast and many characters, it is hard to develop all the characters and make people care about them. In here it is the same, the first hour basically it’s a collage of one minute scenes of things that a character does. Sometimes I don’t even know who that character is, so these characters become empty vessels that deliver a certain line or a joke.

Fortunately, the story gets better after it focuses on John Malkovich. I predicted the ending, but it still is a happy, heart warming ending that brings a smile to my face.