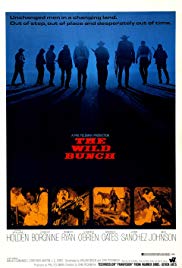 Storyline:
It’s 1913, and the “traditional” American West is dying. Among the inhabitants of this dying era are an outlaw gang called “The Wild Bunch.” After a failed railroad office robbery, the gang heads to Mexico to do one last job. Seeing their times and lives drifting away in the newly formed world of the 20th century, the gang takes the job and ends up in a brutally violent last stand against their enemies deemed to be corrupt, in a small Mexican town ruled by a ruthless general.
Written by
blazesnakes9
User Reviews: Peckinpah has a rep and this is the film which provided most of it. I had the privilege of actually seeing this on the big screen once, in the late seventies. As the beginning credits end, Pike (Holden) tells his bunch "If they move, Kill ’em!" Then Peckinpah’s credit appears. A woman seated behind me gasped, whispering "oh, no…" Oh, my. It sounded like the lady didn’t know she’d wandered into a Peckinpah film and she knew what she was in for. When you enter Peckinpah-land, you need to be prepared. There are no punches pulled, no sidestepping the unpleasant aspects of life. Peckinpah’s characters are tough men; I mean, really tough, not phony-Hollywood tough. In this case, they are coarsened by what seems to be years on the trail, blasted by the sun, snapped at by rattlesnakes, and harassed by bandits. And at this point, they’ve pretty much had it.

Not that they’re complaining, mind you. They’ve lived their lives how they saw fit, this bunch, and they make no apologies for any of it. I believe the actual year is around 1913, just before World War I begins. Most of the action takes place in Mexico, where the Bunch becomes involved with a local general (Fernandez) with the usual delusions of grandeur. If you go by the name of the character Angel, the general can be viewed as a version of the devil. That would make the Bunch avenging angels at the end. But heroes? No, not at all. They have their own code, they know instinctively they’re stronger together than on each own, but they reason this concept out also – Peckinpah wants to make sure it’s clear these are not unthinking savages. They’re just men, who’ve reached a point in history where they must make a crucial turn. History, it seems, has no real use for them anymore. It’s quite simple – they either fade slowly or go out quickly. In a film such as this, with its now insurmountable rep, you tend to wait for those big set pieces, especially the climactic battle. Wait for it, wait for it… here it is. Bam! – you’re in Peckinpah territory. You’re a part of history.