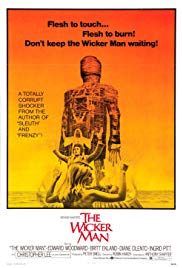 Storyline:
On Sunday, April 29, 1973, Sergeant Neil Howie with the West Highland Constabulary flies solo to Summerisle off the coast of Scotland. He is there to follow up on a letter addressed specifically to him from an anonymous source on Summerisle reporting that a twelve year old girl who lives on the island, Rowan Morrison, the daughter of May Morrison, has long been missing. The correspondence includes a photograph of Rowan. Upon his arrival on Summerisle, Howie finds that the locals are a seemingly simple minded lot who provide little information beyond the fact that they know of no Rowan Morrison and do not know the girl in the photo. Mrs. Morrison admits to having a daughter, seven year old Myrtle, but no Rowan. As Howie speaks to more and more people, he begins to believe that Rowan does or did live on the island, but that the locals are hiding their knowledge of her. He also begins to see that the locals all have pagan beliefs, their “religion” which centers on procreation as the …
Written by
Huggo
User Reviews: Drawn to a small Scottish Island by a letter pleading for help in finding a kidnapped girl, Sergeant Neil Howie realises that things are very different from life on the mainland. He begins to suspect that Rowan’s disappearance may be part of a ritual to appease the nature gods worshipped on the island.

Well known now as one of the best British horror cult movies (one critic called it `the Citizen Kane of British horror’) this film still stands today as new generations discover it’s ending and fall in love with that. Sadly, most people know the ending before they have actually seen the film, which, in my mind, greatly takes away from the film’s impact. For that reason I will make no mention of the ending’s detail suffice to say that it works very well and actually raises the rest of the film.

The main body of the film sees Howie hunting for the missing girl and finding that things are not as simply as he originally thinks. The film comes across as a sort of spiritual musical for the most part and doesn’t really bring out the tension or suspicions until near the end. The downside of this is that parts of the film appear slightly dull or meandering. I did get a little tired with the overuse of naturalist religious images but I accept that they were necessary for the story to be built.

The cast are very good. Lee was happy to do a film that brought him away from the camp Hammer horror mould into which he had been set. His Lord Summerisle is an image of cold, religious zealotry  terrifying in his portrayal of evil as part of `the right thing’. Woodward is also cast against type as he was a harder man in much of his work rather than a pure upright type. Ekland is good but is dubbed the whole way through the film to give her a Scottish accent in place of her own distinctive Swedish one. Of the cast it is Lee and Woodard who carry the film  their scenes together work well and they also carry the opposing moral weights of the story.

Overall this is a film that has had a reputation built on it’s ending, and for that it is well deserved. However for the majority of the film the pacing is a little off and I felt that the songs slowed the film down too much. Overall the film works due to it’s set-up and payoff, however it’s delivery as a total film is not as good as it’s reputation would have you believe.

Storyline:Following an incident in her past, Cordelia now lives with her twin sister, Caroline in their late father's basement flat.User Reviews: