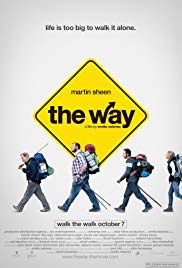 Storyline:
“The Way” is a powerful and inspirational story about family, friends and the challenges we face while navigating this ever-changing and complicated world. Martin Sheen plays Tom, an American doctor who comes to St. Jean Pied de Port, France to collect the remains of his adult son (played by Emilio Estevez), killed in the Pyrenees in a storm while walking the Camino de Santiago, also known as The Way of Saint James. Rather than return home, Tom decides to embark on the historical pilgrimage to honor his son’s desire to finish the journey. What Tom doesn’t plan on is the profound impact the journey will have on him and his “California Bubble Life”. Inexperienced as a trekker, Tom soon discovers that he will not be alone on this journey. On his journey, Tom meets other pilgrims from around the world, each with their own issues and looking for greater meaning in their lives: a Dutchman (Yorick van Wageningen), a Canadian (Deborah Kara Unger) and an Irish writer (James Nesbitt), who is …
Written by
The Way
User Reviews: This is surely Emilio Estevez’s Masterwork, in the same way as was Costner’s "Dances with Wolves". It is "The Quiet Epic"! The movie didn’t require; Noise, CGI, Foul Language or Special Effects – all that it needed and got were; Across the Board Top Class Acting Performances and Brilliant Cinematography.

Although, no longer a spring chicken, I spent over 2 hours completely engrossed in this film, alternating between tears and laughter. I found it was a movie made with such loving care that it encouraged, and enabled me, to share their experience and make my own life journey with them. My own emotions and life history became intermingled with theirs. I feel it was Emilio’s intention for us all to take "Our Own Way".

My main sadness is that so many people will be unable to see it at cinemas, as it has only been given a single weeks run to facilitate the usual glut of "So called Blockbusters". Movies like The Way need time to breathe, as "Word of Mouth" is the key to expanding Audience figures and the wider appreciation such a work deserves..

Storyline:David Prowse, the actor who played Darth Vader at the first Star Wars Trilogy, never revealed his face during the films. He could have done it only once at "Return of the Jedi", but something happened. Anoth...

Storyline:Encountering Burning Man, follows the artistic and personal quests of an anthropologist and three fire artists while they head to Black Rock Desert in Nevada where more than 45,000 people gather every year t...

Storyline:Two best friends are forced into street hustling and and ever-expanding life of crime when one impregnates the sister of the other. Written by Jim StarkUser Reviews: One of the best films of ...

Storyline:Explorer Adam Shoalts embarks on an estimated 4000 km journey across the Canadian Arctic by canoe and on foot, alone.User Reviews: Yes, it's a rare person to handle the loneliness and physicality and sacrifi...