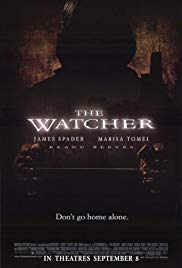 Storyline:
David Allen Griffin is a cool killer- time and time again, he chooses a female victim, studies her for weeks till he knows her routine to the smallest detail, makes meticulous preparations using his forensic knowledge to gain entry when she’s quite alone, subdues her and administers a long, torturous death. Joel Campbell got so frustrated by his failure to capture Griffin in Los Angeles, that he quit the FBI, moved to Chicago, and remains in psychiatric therapy, unable to function normally. Then he realizes, when opening his mail very late, that a new murder victim is Griffin’s, and the killer sent him pictures of her. Campbell reports this to the police, but is unwilling to join them in the search, suggesting Griffin is too slick and clever; yet he won’t get out of it that easily.
Written by
KGF Vissers
User Reviews: Having failed to catch a serial killer who finally murdered a woman he had been sleeping with, Joel Campbell moves cities and lives his life on benefits suffering from migraines, heavily medicated most of the time. This painful but quiet life is shattered when the killer follows him to the city and begins a game of cat and mouse with him – sending him a picture of a woman 24 hours before he kills her. Joel rejoins the police in an effort to save his potential victims as well as catching him.

I, like many others, wasn’t too bothered by this film when it was released – it looked like it would be yet another serial killer movie, and it was! The plot requires the usual gimmick and here it is the old chestnut of the cop and bad guy needing each other and the killer having a sort of respect and need for his pursuer. None of the film will surprise you but it still moves forward reasonably quickly without being dull and it is reasonably enjoyable. The action scenes are not great and the film never really has a real air of menace or tension, but it is still slick enough to watch – even if it is almost impossible to be emotionally involved.

The director managed to get his timing right to get Reeves in the midst of a reasonable cast; he shot a few videos for Reeves’ band years prior in exchange for Reeves doing this film which, despite hitting it big with The Matrix, was a promise he honoured. However as a director his music video roots are heavily showing here with far too many flashy visual tricks that stick out from the body of the film and actually take away more than they bring. However, getting Reeves was worth him having the chair for his star does surprisingly well to step out of his Neo role and into a mean, playful role. No, he’s not doing anything different with it from anyone else who plays this type of serial killer role but he is still charismatic enough to make a difference. Spader is also pretty good and has more to work with than Reeves, but Tomsei is almost totally wasted with very little to do to justify such a well known actress. To be honest none of them have much to work with above the norm, but they still add to the film by their names.

Overall I did quite enjoy the film but I will be the first to admit that it was nothing new and really didn’t do anything different or unusual with the basic premise and material. The director tries to liven it up a bit with the odd visual trick, but it only serves to make the film look a little desperate to be different. The end result is an average thriller that has a better than average cast (for this type of thing) and will pass the time without annoying you if you know what to expect.