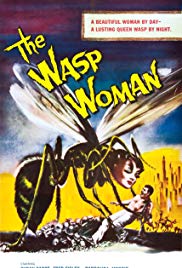 Storyline:
Janice Starlin, the owner of a cosmetics firm, sees that her fading beauty is not only causing waves in her personal life but causing some prestige problems for her also-fading business. She becomes an easy mark for a pseudo-scientist, Eric Zinthrop, who claims to have developed a serum from the enzymes of wasps that will turn aging skin to youthful-looking skin. The second-best thing to a time machine. She, without any hesitation, agrees to be the first human to try the Zinthro injections. But, as her beauty returns, her secretary, Mary Dennison, and her advertising executive, Bill Lane, notices she is also having a personality change and it isn’t for the better, albeit she was no Miss Congegeniality to begin with. Then, Zinthrop gets hit by an automobile, for plot-development purposes, and is somewhat incapacitated and not in any shape to be whipping up any new batches of Zinthrop’s Wasp Enzyme Injection Serum and, without her enzyme injections, Janice turns into a wasp-like woman …
Written by
Les Adams <[email protected]>
User Reviews: ‘The Wasp Woman’ is one of Roger Corman’s better monster movies (personally I prefer his biker, black comedy, gangster and psychedelic movies, but that’s me). Susan Cabot stars as an ambitious head of a cosmetics firm. Being the public face of the company, she takes a downturn in sales as a personal criticism. So when a scientist experimenting with Royal Jelly, not just your average Royal Jelly, but some made from wasps, comes to her attention she hires him to experiment with its alleged anti-aging effects. Initial tests on assorted animal are so successful she begins to try the stuff herself, with impressive results. Only problem is that in her enthusiasm she forgot to see if there are any negative side effects, and by looking at the title of the movie, it’s pretty obvious that there are! Herein lies the fun of this goofy movie. Sexy Cabot is good in this her final role. A bizarre footnote to her short career is her death in the mid-80s at the hands of her dwarf son. Amazing but true! But that strange event aside, the movie itself stands on its own merits. Nothing too ambitious, but an effective low budget trashy shocker that makes a great popcorn movie. By no means Corman’s best work but very entertaining just the same.

Storyline:As a conscript in war-time Japan's military, a pacifist struggles to maintain his determination to keep his ideals.User Reviews: