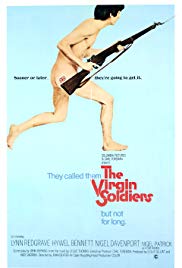 Storyline:
A group of young British soldiers billeted in Singapore of the year 1950 dreaming about winning the love of the daughter of the Regimental Sergeant Major.
Written by
Volker Boehm
User Reviews: As a piece of semi-biographical history of recent colonial history in Malaya soon after World War II, you could probably do much, much worse than to see this rollicking black comedy. But, this is not a war story to be compared with Platoon (1986) and such like: this a young man’s story where war, although present, is something to be avoided, at all costs.

The film is distinctive for a number of reasons: it deals with a politically painful episode in British history the communist insurgency in Malaya; it was shot on location Singapore and Malaysia barely ten years after the British departed en masse; it has a bevy of experienced actors who fill the roles of tight-lipped colonials with flair and even brilliance; it was fun to spot three bit players who went on to stardom later in life (read through the full cast list); and, above all, it’s a very personal story about a young man (Hywel Bennett as Pvt. Brigg) and his coming of age while serving as a National Service conscript.

Having served, myself, in the Australian colonial administration in Papua-New Guinea in the early 1960s, I can assure viewers that much of what you see in this movie is more or less what I experienced and observed where I was. And, for what it’s worth, I can also relate to Pvt. Brigg’s story in many ways…

In a nutshell, Brigg is enamored by the daughter (Phillipa played by Lynn Redgrave) of RSM Raskin (Nigel Patrick, in a standout performance). But, Brigg is also very much interested in a local prostitute, Juicy Lucy (the sublimely effervescent Tsai Chin), mostly as a means to lose his virginity. Phillipa, for her part, is also determined to lose her virginity to whomever largely as a response to her father’s disparaging comments about her sexual orientation. In the wings, so to speak, there is Top Sergeant Driscoll (the ever-so-suave Nigel Davenport), always ready to come to the aid of a female in, er, distress. How the shenanigans of that quartet pan out forms the substance of Brigg’s story a deliciously ironic narrative that guarantees viewer satisfaction.

As a backdrop to that story, the gradual deterioration of British rule intrudes (riots, communist insurgents, a derailed train, attack and counter-attack) to show (mostly comedic) vignettes of many other characters who form the group of service men within which Brigg serves. For example, I was almost helpless with laughter as I watched the inevitable, drunken deterioration of the men and women at the local mess hall dance: déjà vu, and then some. Be sure to watch and listen carefully as officers carefully navigate the hall, ignoring and stepping over drunken, supine revelers with skill as they discuss coming action. And, quite daring for the times, the antics of two gay recruits throughout this film is a continual comedic delight.

The full color photography captures the tropics perfectly; the dialog is excellent; the action scenes and editing more than adequate; the acting is, for me, spot on and redolent of real people I mixed with, long ago; and even the bold, loud marching sound track suited the story.

If you’re getting on in years, like myself, then you’ll relate to those times depicted with ease, I would think; if you’re young and ready to change the world, see how these young men did it sixty years ago. Either way, this is a movie I recommend highly for young and old adults alike.

Give this one a good, solid eight, for sure.