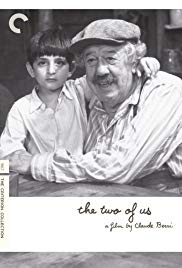 Storyline:
Claude is a Jew. Because of the risks of an arrest (France is occupied by the Nazis), his parents send him away to an elderly couple in the country. Pepe, the husband, is a Petain supporter and a anti-Semite, but he does not know about Claude’s religion. The film is the story of their growing mutual affection.
Written by
Yepok
User Reviews: This tale of a young Jewish boy sent into the French country side to avoid the possibility/likelihood of a round up of Jews by the Vichy Government parallels Claude Berri’s personal experience, I believe. It says at the very beginning of the film that it is an experience seen in retrospect from the vantage point of the child. So, while it is sentimentalized as another commenter wrote on this site, that’s what one might expect from a grown up looking back at the adventures of his eight or nine year old self. This is definitely NOT a straight forward narrative from an uninvolved scriptwriter/director. The "Grandfather" with whom the child is lodged hates Jews. He claims to be able to recognize them by their smell, their hooked noses, etc. The role of the Grandfather is brilliantly executed by Michel Simon. Filmed in the sixties in black and white, it still appears occasionally at Jewish film festivals under the title "The Two of Us." While you may despise the Grandfather’s bigotry, he’s also portrayed as loving toward the boy and lovable. The connection between the Grandfather and the boy, portrayed by Alain Cohen, is actually quite touching. A brief scene at the very end seems to indicate that the boy was reunited with his parents after the war but it passes by so quickly that I’d have to see it again in a stop frame to be sure that the faces of the parents are real and not imagined. Not a great movie, but definitely worth seeing.

Storyline:June 6, 1944: The largest Allied operation of World War II began in Normandy, France. Yet, few know in detail exactly why and how, from the end of 1943 through August 1944, this region became the most import...

Storyline:Cécile, Sonia and Elise, three childhood friends go to the Côte d'Azur to empty the house of one of them to be put on sale. During these few days, they will become the preferred targets of three young boys, ...

Storyline:In a port town in northern France, Milla and her boyfriend Leo set up in an empty house that is gradually transformed into a home. Life itself intervenes after Leo takes a job on a fishing boat, and Milla, s...

Storyline:A singer who is believed dead returns with a decidedly different appearance.He has been in Russia and has lost his memory. But his wife still loves him.User Reviews:

Storyline:A sailor, who meets a lovely music hall singer during a police raid, falls in love. In a contest at a fair, he defeats a former boxing champ. The ex-champ trains the sailor to become a boxer. After he wins t...

Storyline:A burlesque heist film with an O.Henry type twist ending.User Reviews: The Terror of Batignolles is a short comedy that is of interest today only because it is the directorial debut of Henri-Georges Clouzot,...