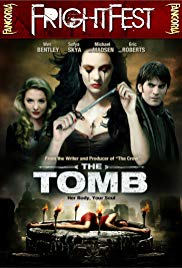 Storyline:
Successful writer and scholar Jonathan Merrick falls under the spell of the irresistible, bewitchingly beautiful Ligeia. She’s fighting a fatal illness and she will stop at nothing to defeat death, her one true enemy. She steals other people’s souls and on her quest to immortality she tricks Jonathan into supporting her work, breaking him apart from his fiancé Rowena and pulling him into her dark, mysterious world. They settle down in an old manor by the Black Sea where Ligeia’s everlasting presence slowly drives Jonathan to madness…
Written by
Michael Staininger
User Reviews: To put it mildly, most of the Horror genre owes a huge debt to the works of Edgar Allan Poe. So many of the genre’s finest works of literature and cinema wouldn’t even exist without writings like "The Conqueror Worm", "Masque of the Red Death" and "The Black Cat" just to name a few. Hell, there have been some stellar films based on his works, especially Roger Corman’s absolutely essential 60’s adaptations. Sadly, the adaptation of "Ligeia" from 2009 named "The Tomb" is not one of the great adaptations.

Jonathan (Wes Bentley) has a lot to look forward to. He’s a respected professor, has a gorgeous girlfriend in Rowena (Kaitlin Doubleday) and so much more. Then Ligeia (Sofya Skya) enters his life. She’s beautiful, tempting, and she has him under her spell, and they move to her castle by the Black Sea. That is, until he finds out that she’s been stealing souls to defeat a disease she has and gain immortality. And if she can’t have Jonathan, nobody can.

There are a few things "The Tomb" gets right. Some (not all mind you) of the performances are good, especially Skya as Ligeia, who plays the character as an Gothic beauty with the right balance between erotic desire and deadly siren. Eric Roberts aka "Mr. Straight to Video" is also fine in his role, though one wishes you had gotten to learn more about his character. Also worthy of note is the fact that for a low budget horror film, the CGI isn’t too bad. Finally, the score by Patrick Cassidy is a lot of fun, and reminded me of the best work from Richard Band.

And that’s where all the goodwill vanishes. While first time director Michael Staininger certainly has an eye for visuals, none of the movie captures the kind of dread and madness that makes the writings of Poe so great. Instead, many of the scenes that are supposed to be creepy instead come of as goofy. Some of the other performances in the movie are rather weak as well, particularly Bentley and Michael Madsen. Bentley is more wooden than a 2X4 here (the less said about his rendition of "The Conqueror Worm" in the end credits the better-though I guess it’s more dignified than being in "Jonah Hex") and Madsen can’t deliver any of his lines properly to save his life, not to mention that it feels too much like he showed up on the set a few days and then left.

The biggest problem with the movie is the script. There are too many lapses in logic (okay, so your boyfriend leaves you for a hot Russian girl, and he comes back, and you just let him back?) and plot holes to count, and it feels more like a rough draft. The really disappointing thing about this though, is that it was written by John Shirley. While he’s mostly known for writing the original script for "The Crow", he’s also written some fine Science Fiction ("City Come a Walkin’") and horror novels ("Wetbones", "Cellars" and "Demons" to name a few.) For an author I enjoy so much to write such a bad script really sucks.

"The Tomb" really has no reason to be watched. Sure, it occasionally resembles the kind of enjoyable Gothic yarns Full Moon Studios used to make, but more often than not it feels like a Lifetime Channel horror movie than an Edgar Allan Poe Adaptation. The movie should have just been called "The Bore of Ligeia."

Storyline:When Andres and Natalia met by accident, she wasn't impressed. In time they gravitated toward each other. But Paulo, a troubling figure from Natalia's past felt otherwise.User Reviews: