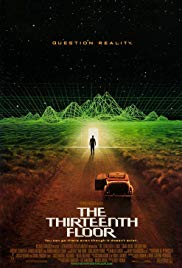 Storyline:
Computer scientist Hannon Fuller has discovered something extremely important. He’s about to tell the discovery to his colleague, Douglas Hall, but knowing someone is after him, the old man leaves a letter in the computer generated parallel world his company has created (which looks like the 30’s with seemingly real people with real emotions). Fuller is murdered in our real world the same night, and his colleague is suspected. Douglas discovers a bloody shirt in his bathroom and he cannot recall what he was doing the night Fuller was murdered. He logs into the system in order to find the letter, but has to confront the unexpected. The truth is harsher than he could ever imagine…
Written by
Danny Rosenbluth
User Reviews: I am a child of the 50’s, and spent my preteen years feasting on all the classic sifi gems, such as " The day the earth stood still", "Forbidden Planet’ etc. The 13th floor reminds me of those movies. This movie has been compared to the matrix, and that is unfair, Special effects are fine, but when they become the focal point of the movie, I think film suffers because of it. I liked the 13th floor because it didn’t get caught up in all that technology and reallied on a great script, and a wonderful ensemble cast. I would highly recommend this movie to all, especially if you prefer the old "War of the Worlds" over the new one.

Storyline:The Candyman returns to try to convince his female descendent, an artist, to join him as a legendary figure. To this end, he frames her for a series of hideous murders of her friends and associates so that s...

Storyline:Ben Holmes, a professional book-jacket blurbologist, is trying to get to Savannah for his wedding. He just barely catches the last plane, but a seagull flies into the engine as the plane is taking off. All l...

Storyline:A murder mystery movie set in Duluth, Minnesota that follows the journey of a woman navigating her past and a Native American police detective searching for a killer.User Reviews:

Storyline:During a small gathering, a smooth, seductive stranger is invited into a couple's house party and falls in love with the wife. Turns out the stranger is an escaped convict who demands that the wife leave the...

Storyline:Drew (Scott Caan) must care for his father, a former professor who can now barely communicate due to Alzheimer. Depressed and struggling to make ends meet, an old buddy tries to get him to become a pusher. H...