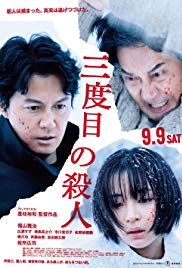 Storyline:
Misumi has a criminal record dating back many years and is now under the spotlight again. It looks like an open and shut case, for Misumi has confessed to the new charge. Enter prominent lawyer Shigemori, who harbours other ideas, which could mean the difference between life and death.
Written by
aghaemi
User Reviews: I’ve just managed to catch up with this quite elusive film as I’m a big Akira Kurosawa film and from what I saw from the description and trailer, this would seem to be Koreeda’s ‘Kurosawa’ film – there are obvious references to both Rashomon and High and Low.

The film indeed is clearly influenced by both those films, with a bit of Kurosawa’s lesser known court drama Scandal thrown in. The plot follows a lawyer, asked by a colleague to assist with a seemingly straightforward capital punishment case. A middle aged man called Mizume is accused of, and has confessed to, the murder of a factory owner, and the theft of money. Mizume had only just been released after a long prison sentence for a previous murder. The lawyers job is to avoid the death penalty by trying to muddy the waters around the murder, and perhaps suggest it was an impulsive act and not planned (from what I can understand, Japanese law tends to have a range of gradations of homocide, with the judge ultimately deciding if it was serious enough for the death penalty).

The job of the lawyers is complicated by the apparent passivity of Mizume, and his constant changing of his story. At first, his explanations are just vague and contradictory, but he then states that he killed the man because he was paid by the mans wife to do so. As the main lawyer, Shigemora, digs deeper, he finds yet another possible motive.

I won’t give away the ending, except to say that there is a ‘probable’ reason given in the end, but so many versions are given its not entirely clear what happened, or (seemingly the core question of the film) whether the truth is relevant at all to the operation of justice. Shigemora is caught in a Rashomon like situation of not knowing whether there is any one real truth, and whether knowing, or exposing, this truth is in any way relevant, morally, ethically or legally.

While the film sort of hedges the line between being a procedural and a more philosophical exploration of justice and truth (which reminded me a little of some recent Korean films such as Memories of Murder and Mother) the film also shows clear influence from High and Low as the main protagonist agonises over the guilty mans motivation, and starts to identify with him – shown rather allegorically in their prison conversations, with one face ‘reflected’ over another.

Rather like Kurosawa with Scandal and High and Low, the film seems to reflect the Directors concerns with the operation of justice in Japan, although those concerns seem pretty universal. In particular, the question of whether ‘justice’ and ‘truth’ are in any way compatible. Rather like Kurosawa’s early films on the topic, the approach is perhaps a little too didactic for audiences not up to speed on the operation of the Japanese system.

As a film, I found it quite engrossing, while simultaneously a little frustrating. Koreeda is famous for a very deliberate, slow approach which in his best work absorbs the viewer into the life of his characters. Unfortunately, this type of film I think requires a more dynamic style, and the film is somewhat one-paced. Worse, it is hamstrung by some rather clunky didactic dialogue (the lawyer is followed everywhere by a young assistant, always asking stupid and naive questions which seem to have no other purpose than to explain to the audience what we are seeing), and some heavy handed metaphors. The two leads are good in the roles, but there is quite poor acting in some of the lesser roles – I think mostly due to the undercooked script and somewhat contrived plotting. I can’t help feeling that Koreeda was trying to get something off his chest with this film, and found himself with a type of film making he’s not really comfortable with.

So while the film is certainly quite gripping, and I found the insights into the Japanese court system very interesting, this is nowhere near the Directors best film. Its certainly worth anyones time with an interest in Japanese cinema to watch it, but be prepared I think to be a little disappointed if you are either a Koreeda fan (I certainly am), or for that matter, a Kurosawa fan.