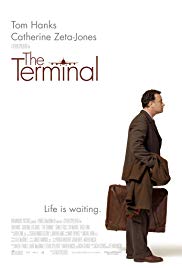 Storyline:
Victor Navorski reaches JFK airport from a politically unstable country. Due to collapse of his government, his papers are no longer valid in the airport, and hence he is forced to stay in the airport till the war cools down. He makes the airport his home and develops a friendship with the people who work there until he can leave.
Written by
Keith Francis
User Reviews: The film begins with a cool look (green and blue), because Spielberg doesn’t think of Immigration as a warm place to be for the few minutes it takes to clear a passenger and get him on his way So all the cool tones are evident until Viktor starts to settle into his new home He is going to be stuck in New York’s JFK airport for an unspecified amount of time From this moment we see Viktor stuck, trapped, unable to enter United States and that’s the fun of this film

Tom Hanks is really so calm, so likable, so emotional, so funny and so real in what he does Here, he’s a very dignified person who is extremely trusting and always full of positive hope You couldn’t insult him if you try It’s very hard to hurt his feelings He finds the bright side of every angle problem he faces and finds a way for him to live with the situation He has the virtue of patience, and the testament to hard work, perseverance, and humility He loves people, and he experiences the culture in an odd way

Hanks plays a Krakozhian capable gentleman whose name is Viktor Navorski who finds himself without a passport and a visa once both are taken from him by the powers-that-be at the terminal, because his visa no longer counts, since his country is no longer in existence, and his passport is no longer valid

Catherine Zeta-Jones brings vulnerability and insecurity to her unhappy character She plays the gorgeous flight attendant Amalia Warren, a very sensible woman who’s always looking for love, trying to find the person that will be her prince She really wears her emotions on her sleeve and is lonely She wants some strong relationship in her life Viktor and Amelia have oceans of things in common and it ends up playing itself out and that’s a nice thing to play

The story leaves a lot for reflection, and in some ways, Viktor’s stillness allows him to be a mirror for the people working in the airport to meditate on their own lives

"The Terminal" is a charming film It looks beautifully and elegantly, but realistically