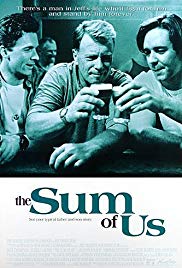 Storyline:
Set in Sydney, Australia. A (heterosexual) father and his gay son are trying to find Ms/Mr Right respectively. The film shows their relationships with one another and the objects of their affection as tradgedy strikes. There is no overt ‘message’ in the film, just a very natural, entertaining story-telling.
Written by
Fred Curtis <[email protected]>
User Reviews: Watching this movie for the first time in nearly ten years I was reminded of how it was very much window of its time but also a movie with universal themes of love that will always keep it relevant and involving.

The narration to camera by the two main characters can take a bit of time to adjust to but once the movie settles in the main story between the father and son is very moving as it is the story of unconditional family love and loyalty. The movie is also about the search for love and growth in life as both characters are there for each other in the sometimes troubled journey.

The son in the story is gay and this becomes a primary focus in the story. The father is not only tolerant but encouraging of his son finding a male lover.

Jack Thompson and Russell Crowe are both terrific in their roles. Both actors are known and play their roles as "typical, masculine" Aussie blokes. (Warning: you will have to allow for some very coarse Australian humour between the male characters)In this scenario, though, that Aussie bloke persona has different dimensions. The son although a "blokey" plumber who plays football, is gay; the father is well read and has an enlightened view of life as he passionately encourages his son to not only find love but to read more, to dream big and discover the world.

Jack Thompson’s Harry is a wonderful character to journey with as he merrily goes forward in life, determined to find love and fulfillment, despite the blows that life has dealt him. Harry also comes across as an ideal if slightly overbearing father figure to Jeff. Russel Crowe’s Jeff is a character that anyone, gay or straight, will identify with who wants to find love but is cautious not to be hurt and rejected again.

The movie was released in 1994, a time in Australia when the Sydney Gay And Lesbian Mardi Gras(featured in a scene in the movie) was arguably at it’s peak, in terms of crowd attendance and media exposure and the nation was very progressive towards equal rights for gay and lesbian people in Australia. Eleven years later the movie can be viewed partly as window to that time that now seems bygone as the nation is currently in a large conservative grip.

But no matter what what the political climate the film’s universal themes, star quality as well as the beautiful sunny shots of Sydney will guarantee it will be around and viewed for many years to come.

Storyline:A test subject at a memory transfer lab commits a crime he cannot rememberUser Reviews: I made the mistake of not watching the trailer before trying this one, based on the many good reviews. If you cut the d...

Storyline:This darkly humorous film explores the personal psychic landscape of two lonely New Yorkers. Jackie and Michael are coworkers at a large law firm, who decide to meet at Jackie's for dinner one night. As this...