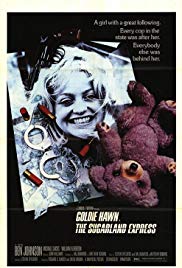 Storyline:
Lou-Jean, a blonde woman, tells her husband, who is imprisoned, to escape. They plan to kidnap their own child, who was placed with foster parents. The escape is partly successful, they take a hostage, who is a policeman and are pursued through to Texas…
Written by
Kornel Osvart <[email protected]>
User Reviews: Petty crook is busted out of pre-release jail by his determined-yet-reckless wife; seems their infant son has been farmed out to a wealthy foster couple while the two were behind bars and the Mrs. wants her baby back now. Director Steven Spielberg’s first theatrical film has a scene midway through that still takes my breath away: Goldie Hawn and William Atherton take refuge in a mobile home parked in a lot behind a drive-in movie theater, a cartoon is up on the screen and Atherton supplies the sound effects–but, as the cartoon descends into violence, he stares out the window while his wife giggles on, oblivious to the parallels between the film and the paths their lives have taken. It’s a miraculous moment in a high-spirited comedy-drama about trying to get what you want–even at the expense of the law. I’m surprised most Spielberg fans turn their noses up at this movie, it’s one of his best. The finale doesn’t really work (the picture switches gears too many times and eventually leaves us eating dust), but Goldie Hawn’s performance is brave and funny and wonderful. In fact all the acting is excellent, right down to the last two-line player. *** from ****