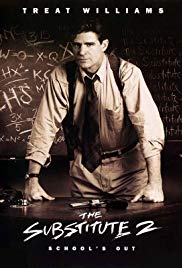 Storyline:
Professional mercenary Karl Thomasson arrives in Brooklyn to attend the funeral of his brother Randall, who was murdered while trying to stop a carjacking that has been blamed on the “Brotherhood”, a vicious street gang led by “Little B.” Karl, who believes there is something more to it, goes undercover as Randall’s replacement at Lenthrop High School in Brooklyn, where Randall was a history teacher, so Karl can investigate the Brotherhood. Karl becomes the protector of Randall’s daughter Anya when their lives are threatened by whoever is behind the recent string of carjackings, and the plot behind the carjackings runs a lot deeper than the Brotherhood, and the threat is a lot closer to Karl and Anya than they dare to think.
Written by
Todd Baldridge <[email protected]>
User Reviews: "The Substitute 2" is decent but not as good as the third one. Treat plays Karl Thomasson, a mercenary who infiltrates a school full of ruffians and drug dealers. It’s just like the predecessor but cheaper.

I’m one of the biggest Treat Williams fans. I will watch basically anything with him in it (except "Miss Congeniality 2"…) This is a good showcase for him, but the DTV-style script lets him down. B.D. Wong plays the shop teacher….who’s evil. His role is uneven and underdeveloped. There’s one scene with a deadly yo-yo! This is a great idea, and a movie highlight. But unfortunately there’s no funny lines like "No Talking In The Library." A good tagline could be: "Class Dismissed….Permanently" If like you DTV Treat, this a good start, but "Substitute 3: Winner Takes All" is the best one.