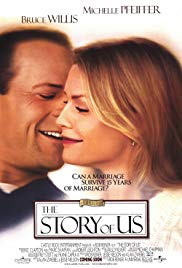 Storyline:
Ben and Katie married fifteen years ago and gifted with two children. They stay together but their hearts had separated long back. After the kids are send to summer camp both start living separately and eventually preparing to break news of their separation to the kids. But being alone in each one’s own world makes them to think about the other. When the D-day comes Katie and Ben stick together for the good of their children.
Written by
Thejus Joseph Jose
User Reviews: I was miffed the first time I saw this film. Miffed that I had allowed the opinions of others to steer me away from it until it came out on DVD. What a lovely bitter sweet/sweetly bitter film. After seeing The Story Of Us and talking to others about it, I came to the pejorative conclusion that the folk I spoke to just didn’t get the film because they simply had not been there. I realized that no one I talked to at first had shared his or her lives with anyone for any more than a few years. This film deals with the daily wear and tear of ANY truly long-term relationship. It is an accurate, albeit theatrical, portrayal of the way high ups and devastating downs that can come to two people who love each other  hate each other  need each other  want each other desperately  hate each other some more and finally love each other again. I concluded that those who had never been to the end (and I mean the it’s over and I am outta here end) of a relationship and still been able to pull away form the precipice and put things back together again, just didn’t have a clue. So there my partner and I were after 16 years together truly touched by all that we saw, nodded our heads to, laughed at and balled our eyes out over and, in the end, really uplifted by in this gem of a film. Michelle Pfeiffer’s final monologue alone would have been worth the price of a movie ticket just to watch  All Actors should be made to watch her has she creates brilliant comedy by bursting into tears. It is a true lesson in comic artistry while still touching the heartstrings. I HATE THE KIRBYS TOO!!!!

Storyline:When an orphaned half Korean girl finds herself in small town America with her only living relative, she seeks out a mentor to help with the only things she loves - golf. The best player in town, the widowed...