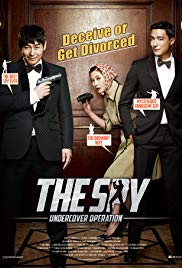 Storyline:
The Spy: Undercover Mission is an espionage comedy that follows Chul-Soo, a super spy whom is hiding his true identity under the cover of working as a civil servant, not even his wife Young-Hee knows about his true identity. Come the bombing at the heart of Seoul, Chul-Soo is sent to Bangkok to investigate a lead that could prove to solve the case. While on the job, Chul-Soo comes to find his wife Young-Hee, whom is supposed to be in South Korea, with a handsome foreigner named Ryan. Chul-Soo is now facing two difficult tasks; a mission to save his beloved country, but also to save his own marriage.
Written by
Paul Magne Haakonsen
User Reviews: Movie: The Spy (15): Action/Comedy – Korean

THE SPY is a completely entertaining action comedy which is gripping from the start to finish. Do watch it, and especially, don’t miss the end!

Storyline:A small town becomes the playground to a masked killer stalking and killing the locals for no apparent reason. With the town's sheriff and locals still more worried about a high school football game than get...

Storyline:During the Joseon Dynasty, power was persistently threatened by political and social tug of wars, often leading to crimes and cover-ups. King Yejong, makes a point to gather evidence related to these crimina...