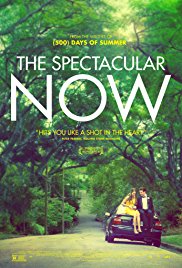 Storyline:
Sutter Keely lives in the now. It’s a good place for him. A high school senior, charming and self-possessed, he’s the life of the party, loves his job at a men’s clothing store, and has no plans for the future. A budding alcoholic, he’s never far from his supersized, whiskey-fortified thirst-master cup. But after being dumped by his girlfriend, Sutter gets drunk and wakes up on a lawn with Aimee Finecky hovering over him. She’s different: the “nice girl” who reads science fiction and doesn’t have a boyfriend. While Aimee has dreams of a future, Sutter lives in the impressive delusion of a spectacular now, yet somehow, they’re drawn together.
Written by
Production
User Reviews: You know when you see those movies and you say they just don’t make these anymore. Well this is that type of movie. Joining the ranks of the best teen movies ever made and possibly the most honest of the bunch The Spectacular now is absolutely brilliant. The film centers on Sutter played charmingly by Miles Teller a charming teenage alcoholic who after a breakup with his girlfriend Cassidy befriends a painfully Naive young girl names Aimee played effortlessly by the mega talented Shailene Woodley. Both of the characters are so complex and so is their story. Like so many other films concerning this age group it is coming of age but unlike most others it doesn’t fall into any clichés and offers no easy answers. Equally moving, touching, hilarious and even a little shocking this film is painfully genuine. A true testament to the choices and experiences that shape you as a person. Miles Teller is brilliant as Sutter he’s charming and damaged you go back and forth between loving and hating him and easily relatable sometimes in the worst ways and very reminiscent of a young John Cusack in his hey day. Shailene Woodley is so confident in her portrayal of Aimee so naive, vulnerable and insecure desperately in search of acceptance and love because of her home situation. But that’s not where the great performances end. Mary Elizabeth Winstead as Sutter’s sister Holly steals her scenes, Brie Larson as his girlfriend Cassidy, Jennifer Jason Leigh as his hard working mother Sara, Kyle Chandler as his father and just the whole cast feels so real. The Spectacular Now isn’t just the bets film of the year it’s an incredible experience. It’s the type f film you leave haven’t learned something. A film that inspires you to make changes. 5/5