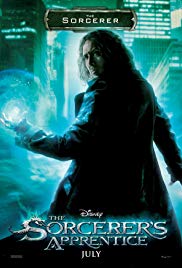 Storyline:
Balthazar Blake (Nicolas Cage) is a master sorcerer in modern-day Manhattan trying to defend the city from his arch-nemesis, Maxim Horvath (Alfred Molina). Balthazar can’t do it alone, so he recruits Dave Stutler (Jay Baruchel), a seemingly average guy who demonstrates hidden potential, as his reluctant protégé. The sorcerer gives his unwilling accomplice a crash course in the art and science of magic, and together, these unlikely partners work to stop the forces of darkness. It’ll take all the courage Dave can muster to survive his training, save the city and get the girl as he becomes The Sorcerer’s Apprentice.
Written by
Walt Disney Pictures
User Reviews: First I should start off saying I love all Jerry Bruckheimer productions, with the exception of CSI: Miami, but that is more David Caruso then the show. I also feel I should admit that I was excited about this movie since I first saw the previews.

That being said I felt the movie was very well put together in some ways not so much in others. I never read reviews until after I see a movie to be able to make my own ideas about it. Then I check to see it I’m in the minority. I’m shocked to say in this film I was. I felt that Nicholas Cage and Jay Baruchel did very well with the parts they were given. I do wish they had more screen time to gel a little better. Alfred Molina as usual does a wonderful job as the evil villain, but I wish his apprentice Toby Kebbell got more screen time. Some of the love story plot could have been given up for more magic scenes. I felt that Dave and Becky didn’t really need all that screen time. I feel the movie is geared toward a younger audiences so to compare it to Inception is unfair no 10 year old is going to get that plot what so ever. Yes it was very predictable to me but not to my 5 year old sitting next to me. I went in expecting a well acted, predictable, easy plot, with some things that would make me chuckle, And that’s exactly what I got.

Overall the plot was easily understandable, the actions a little predictable, and the chemistry a little off with some of the characters. However give it a break I’m 23 and a mother of 4, and with all the children’s movies I have seen this summer this is one I will actually buy when it come to DVD.

Also I just have to say I love the main song Secrets by Onerepublic I have had it stuck in my head since I left the theater!