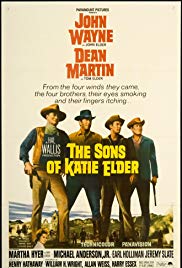 Storyline:
The Elder boys return to Clearwater, Texas for their Mother’s funeral. John, the eldest, is a well-known gunfighter and trouble follows him wherever he goes. The boys try to get their ranch back from the town’s gunsmith who won it from their father in a card game, after which he was murdered. Troubles come, however, just because they carry the Elder name.
Written by
anonymous
User Reviews: "The Sons of Katie Elder", though not one of John Wayne’s best westerns, is very entertaining nonetheless. Director Henry Hathaway keeps the story moving providing us with breathtaking scenery and a rousing finale. We are also treated to another rousing score from composer Elmer Bernstien.

The story has the four Elder brothers, John (Wayne), Tom (Dean Martin), Matt (Earl Holliman) and Bud (Michael Anderson Jr.) returning home to Clearwater, Texas for their mother’s funeral (the "Katie" of the title). It seems that Katie had been held in reverence by the townspeople while eking out a living to enable the youngest, Bud to attend college.

Their father had also died six months earlier and had apparently lost the family ranch in a poker game. Further investigation reveals that he had been murdered by being shot in the back.

Number one suspect is the town gunsmith Morgan Hastings (James Gregory). Hastings it seems, has acquired the Elder ranch and lives there with his spineless son Dave (Dennis Hopper). Hastings has also hired gunfighter Curley (George Kennedy) to help him get rid of the Elders.

When town sheriff Billy Watson (Paul Fix) is murdered Deputy Ben Latta (Jeremy Slate) immediately blames the Elders and arrests them. While transporting his prisoners to another venue they are ambushed and…….

This was the first film for Wayne following his surgery for cancer. You’ll notice that he wears a large bandanna over his neck, presumably to hide the scars and/or the jowls. He was now beginning to show his age and the fact that at nearing age 60, he was still playing a character presumably much younger, kind of detracts a little from his credibility in the role. But hey its John Wayne. Who really cared?

As in most of Wayne’s films, the cast includes a roster of recognizable faces. Martha Hyer provides window dressing as Wayne’s potential love interest. Also in the cast are John Qualen as the jailer, John Litel as the minister, John Doucette as the undertaker, James Westerfield as the banker, Karl Swenson as the bartender, Rhys Williams as Striker the horse rancher, Strother Martin as the guy who "wins" Martin’s glass eye, Percy Helton as the storekeeper and Rudolfo Acosta and Chuck Roberson as contends.

The two plus hour running time goes by quickly. Don’t miss the scene where Wayne cold cocks Kennedy or the final shootout.