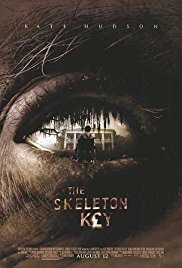 Storyline:
A young hospice worker helping care for an invalid who lives in a remote mansion in the Louisiana bayous finds herself caught in the middle of morbid happenings centered around a group of Hoodoo practitioners.
Written by
Ed
User Reviews: Part of the success of this type of movie is setting up and making sure its resolution lives up to its expectations. I must say that in this film everything seems to work, and yet… I’m not sure what spooked more: its ending or the nature of its ending.

The film deals with the adventures of a young care worker in the middle of Louisiana. The atmospheric surroundings, the haunting score, beautiful, spooky photography, and some very good acting by Rowlands and Kate Hudson raise the bar for upcoming "horror films". We’re glued to the screen for nearly two hours, as things become more mysterious and intriguing. A few times we’re treated to a jolt and a revelation, but what closes the film is bound to ruffle a few feathers.

Above all, this is a very good movie, with a script that doesn’t cheat anyone and doesn’t rely on silly gimmicks. Those factors should portend good tidings for its success in its original release, but it will probably become a classic of its kind. The heroine in distress manages to be smarter than the usual stereotype. She wants to explore the surroundings and solve the problem. The problem is she has no idea how bad the situation might be.

Gena Rowlands provides her character with nuances rarely seen in this type of film. She is a strange character and hooks up the audience from the very beginning. There is no really an archetype for what Rowlands brings to life. A few might find the previous statement questionable, but if you look closely to the development of her character, it is almost an original.

Kate Hudson makes a very strong impression in this film. She goes beyond the pretty actress to an accomplished performer who matches up to Rowland’s intensity. She navigates the film with an ease rarely seen in today’s roster of plastic pre-packaged pseudo celebrities. It is refreshing to see an actress make you care for the character that has so often been portrayed as an offensive stereotype. There no gratitude’s screaming scenes here. The film reminds me of "The Others", a movie with substance and intelligence.

This is a film that I will highly recommend to my friends, particularly because I want to hear what they have to say about that ending.