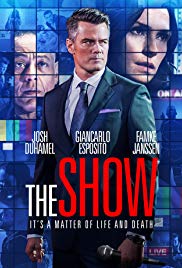 Storyline:
An unsettling look at reality T.V. where a disturbing hit game show has its contestants ending their lives for the public’s enjoyment.
User Reviews: Do you like watching people commit suicide for two hours? Then you’ll love this!

This is a not-particularly-subtle indictment of reality television and our enjoyment-of-the-pain-of-others culture. Criticism of reality television seems anachronistic at this point; this kind of vitriol (though perhaps warranted) was outdated a decade ago. The characters are not characters; they are plot devices filled with sound and fury, signifying nothing. They have no substance; they act because the writers want to make a point. That point? Something along the lines of "Don’t take enjoyment from the pain of others." There. I summed it up for you so you don’t have to watch people commit suicide for two hours. You’re welcome.

Storyline:The last movie with Jerry Lewis and Dean Martin together, is a satire of the life in Hollywood. Steve Wiley is a deceiver who cheats Malcolm Smith when he wins a car, claiming that he won it too. Trying to s...