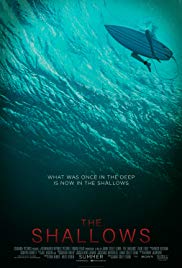 Storyline:
In the taut thriller The Shallows, when Nancy (Blake Lively) is surfing on a secluded beach, she finds herself on the feeding ground of a great white shark. Though she is stranded only 200 yards from shore, survival proves to be the ultimate test of wills, requiring all of Nancy’s ingenuity, resourcefulness, and fortitude.
Written by
Sony Pictures Entertainment
User Reviews: A decent little one-location thriller, but it’s one I wish were just a little better than it is. Blake Lively plays a surfer who gets stranded on a tiny island that will be gone as soon as high tide comes in. Circling around her is a massive great white shark, which has already made a nice gash on her leg. This starts off excellently, with some truly awesome surfing footage and beautiful cinematography. The set-up is chilling, and the shark is nice and menacing – that is until we start seeing it a lot. As the film goes on, it can’t help but give us a lot of shark. I don’t mind the couple of aerial shots where we see the behemoth in its shadowy, underwater form. Sure, it’s ridiculously huge there, whether from the refraction of the water or just exaggerated from Lively’s perspective. No, we start to descend underwater and we get plenty of clear views of a CGI shark that doesn’t really move like a real shark (it never really behaves like one – one wonders why it wants Lively so bad when it has an entire, bloated, dead whale not putting up any fight just a stone’s throw away). What harms the film too much for me is the climax, which is eye-rollingly silly. I also could have done without the sequence with the cartoonish borracho, too. It felt like that was added late to extend the runtime a smidge.