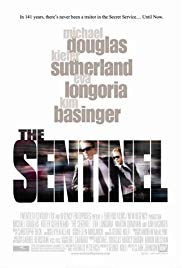 Storyline:
A man who has devoted himself to serving the leader of the free world is accused of plotting against him in this thriller. Pete Garrison (Michael Douglas) is a veteran Secret Service agent who has had a long and distinguished career helping protect the president of the United States. David Breckinridge (Kiefer Sutherland) is a fellow Secret Service agent who learned most of what he knows from Garrison and holds him in great respect. When intelligence data suggests that there is a mole within the Secret Service who is part of a plot to assassinate President Ballentine (David Rasche), Garrison launches an investigation to ferret out the rogue agent, and asks Breckinridge to go over the evidence with a fine-toothed comb. Breckinridge is shocked when the clues point to Garrison as the traitor within the Secret Service, but his sense of duty compels him to see that his former mentor is placed under arrest. Garrison eludes his captors and struggles to prove his innocence while tracking down…
User Reviews: "The Sentinel" is an average-at-best action drama that does not come remotely close to reaching its potential. The entire movie feels rushed, with random details about each character’s past thrown at you in a poorly-written screenplay. The revelation of the true bad guy in conspiracy films normally elicits at least some form of surprise or intrigue; instead, in "The Sentinel" the character is far too obvious and the scene reveals a tangential and unexplained back story that should instead be much more central to the plot.

The rush to cram details in every fleeting moment ruins this movie. For example, without spoiling the film, the culminating chase of the movie is ruined by a ridiculous proclamation of certain password to get by people; the ridiculousness of the situation takes away from what should be a tense finish.

This review is not meant to be overly disparaging; the film received 5/10 because it is a moderately entertaining summer movie and I did not regret going to see it. However, the skeleton plot seemed to be trying too hard and the characters were not well-utilized. Eva Longoria is very attractive though.