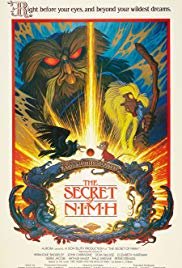 Storyline:
Mrs. Brisby, a widowed mouse, lives in a cinder block with her children on the Fitzgibbon farm. She is preparing to move her family out of the field they live in as plowing time approaches, however her son Timothy has fallen ill, and moving him could prove fatal. Mrs. Brisby visits The Great Owl, a wise creature who advises her to visit a mysterious group of rats who live beneath a rose bush on the farm. Upon visiting the rats, Brisby meets Nicodemus, the wise and mystical leader of the rats, and Justin, a friendly rat who immediately becomes attached to Mrs. Brisby. While there, she learns that her late husband, Mr. Jonathon Brisby, along with the rats, was a part of a series of experiments at a place known only as N.I.M.H. (revealed earlier in the story as the National Institute of Mental Health). The experiments performed on the mice and rats there boosted their intelligence, allowing them to read without being taught and to understand things such as complex mechanics and …
Written by
MIss Victoria
User Reviews: This film has more soul than most animated films. The film music is excellent, and honestly is the shining jewel of the movie. The art work is excellent for the time period: and no computers used! The backgrounds have excellent detail: they could honestly be used as great works of art on their own merit. The voices are excellent and very fitting for the characters. The story line is very well done: while not lacking in action at any time, it’s also not like most modern films that are constantly "in your face" with fast-moving activity. The facial expressions are outstanding! Too bad Don Bluth didn’t do more films! The mud in certain scenes was very well done. The story has great struggle and good-versus-evil appeal to it. The music is actually great for an animated film: no catchy or cheeky pop music at all, but the music score seems to always be doing something. Many times it does such a good job at painting the mental picture of certain scenes that if you were to listen to the score by itself after seeing the movie, you could trace the story line by heart. Even the musical prototype for the main theme, "Flying Dreams" (or whatever) was done so well that it makes one wonder who wrote and performed the original demo (first song of the credits). Excellent movie in all aspects, even if it seems "old school" to some 🙂