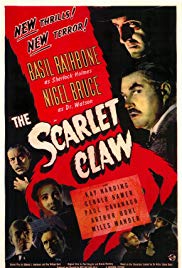 Storyline:
While attending a conference in Quebec City, Sherlock Holmes and his good friend, Dr. Watson, are drawn into a murder investigation in the nearby village of La Mort Rouge. Holmes had received a letter from Lady Penrose asking for his assistance as she feared for her life. It was too late, however, as she had already been killed by the time he received it. Her throat was torn out and the local villagers are spreading rumors about monsters and evil spirits as being the cause. Holmes doesn’t believe any of that and sets out to find the killer. He believes that Lady Penrose’s past as an actress may have something to with her death. As others in the village are attacked, Holmes believes the killer is among them, impersonating a local villager as he goes about his business.
Written by
garykmcd
User Reviews: Although to some people this might be blasphemous, I am not at all a fan of the way Bruce interprets the Watson character. This is simply because I believe this is not the way ACD intended to portray the character and it’s simply ridiculous. Movies being another art form though, one must certainly make allowances for alternative interpretations. Rathbone, as usual, excels himself here and in my personal Holmes actor ranking he’s first just before Jeremy Brett.

At the outset, I had the slight impression that the story is a bit of a rip-off of the HOUND but very soon one realises that the storyline goes into quite another direction. But since The Hound Of The Baskervilles is my very favourite Holmes story that didn’t undo the story for me.

What made me wonder a bit was that although set in francophone Canada the only French allusions are the use of the address ‘monsieur’ and the name of the village… Everything else sounds quite English.

Still, the movie is greatly entertaining and the eerie marshland atmosphere with a hint at the supernatural is cleverly caught.