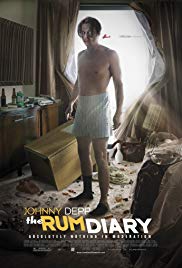 Storyline:
Hard-drinking journalist Paul Kemp takes a job at a besieged newspaper in San Juan, Puerto Rico. His volatile editor, Lotterman, assigns him to tourist pieces and horoscopes, but promises more. Paul rooms with Sala, an aging and equally alcoholic reporter, in a rundown flat. Sanderson, a wealthy entrepreneur, hires Paul to flack for a group of investors who plan to buy an island near the capital and build a resort. Sanderson’s girl-friend, the beguiling Chenault, bats her eyes at Paul. His loyalties face challenges when he and Sala get in trouble with locals, when a Carnival dance enrages Sanderson, and when the paper hits the skids. Is the solution always alcohol?
Written by
<[email protected]>
User Reviews: The Rum Diary is a drama conjoined with elements of playful humour, based on the self entitled novel by Hunter S. Thompson. The film boasts one of the most critically acclaimed actors Johnny Depp, who is joined by other noticeable stars such as Aaron Eckhart (The Dark Knight), Giovanni Ribisi (Gone In 60 Seconds) and upcoming beauty Amber Heard. Depp himself is familiar with Thompson when incorporating his novel Fear and Loathing in Las Vegas onto the big screen in 1998. With this in mind we were certain to expect elements of surrealism with maybe the odd drug usage now and then. The story is set in the 1950’s and follows Depp through the character of Paul Kemp who moves to Puerto Rico as a journalist who is in search of work, a good story and possibly something more. With his new job comes new friendships, utter absurdity, vast amounts of alcohol all topped off with a blonde bombshell.

The Rum Diary displays beautiful visual strategies in stages throughout the narrative. Being based on the island of Puerto Rico the camera work certainly fetishises the beauty of the island in the same way in which beauty Chenault (Amber herd) is captured. Her blonde hair and blue eyes offer the same satisfaction as long stretching beaches and deep blue oceans. The visual strategies are very creative and often juggle between states of mind that Kemp and others alike are under. This being most apparent in a scene between Kemp and co-worker Sala, when experiencing an unknown drug, which is taken as eye drops. Similar visuals between this scene and ones in Fear and Loathing in Las Vegas can be matched, and anyone who is familiar to this film knows that experiences of intoxication are to be had. The hazy and slow motion camera work have been closely thought out to create these effects over us, the audience, as we are able to be a part of these actions.

One thing that I have been highly impressed with is the script itself; people have mentioned that The Rum Diary has not lived up to expectations and could have been better. However, this is not my personal opinion and I will offer a different outlook on the matter. My expectations of the film were not high due to these reviews but I am an individual who likes to make my own assumptions. The storyline offered, in my opinion, intriguing characters that all offer special characteristics in the narrative. They have been well thought of and are strong and understood rather than being weak or pointless. Moberg, played by Giovanni Ribisi, is a violent, black mailing, alcoholic who works in the newspaper with Kemp and Sala but rarely shows up to work and on the odd occasion he does he is drunk. The character is built to represent the pointlessness of the newspaper and seems to have worked out what Kemp has yet to learn already. His far fetched logic and actions all add up to a comic effect in the story which present light relief to a dramatic storyline. Scenes involving Voodoo witches and Nazi uniforms add to the surreal yet humorous conventions The Rum Diary offers.

As I mentioned, my expectations of The Rum Diary weren’t at all particularly high but because of this aspect I think I enjoyed the spectacle more and was pleasantly surprised. The storyline keeps on going and I was never left with the feeling of it dragging on but left wanting more, which the film could have easily done without becoming numb. The characters are entertaining as well as fresh and the surreal aspects certainly are not typical in everyday Hollywood blockbusters. The film is defiantly worth watching in terms of its originality as well as the comical moments and strong storyline.Defiantly a film worth seeing and remembering. You don’t have to be under the influence to enjoy this ride