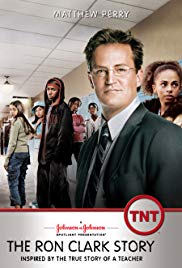 Storyline:
1998. Ron Clark, still relatively early in his career, leaves his stable life teaching at an elementary school in his suburban North Carolina hometown, the school where he is appreciated by both his fellow teachers and his students for his innovative teaching methods which results in raising test scores. Instead, he decides to look for a teaching job at a tough New York inner city school where he feels he can be more useful. He eventually finds a job at Inner Harlem Elementary School, where the students are segregated according to their potential. As Clark is white and “nice” looking, Principal Turner wants to assign him to the honors class, especially as Turner’s job security depends on good test scores. Clark, however, wants to take the most disadvantaged class. He quickly learns that it will be a battle of wills between himself and his disruptive students to see who can outlast the other. But he also learns that he has to understand them, both individually and collectively, on …
Written by
Huggo
User Reviews: This was a very pleasant surprise for me over the Christmas break even at the time it was screened at 06.00 am, lucky I got up early! Rarely am I so taken with a film such as this, but obviously the story line really got me, as did the excellent acting by all the cast, the kids were just great, and utterly convincing.

I was also pleased to discover the film was based on fact, and I was pleased that these rebel children went on to greater things, would not the world be a much better place if there were More Mr Clark’s around? Not just in teaching but in all walks of life, especially in politics and industry.

Honesty is in very short supply these days, now I am rambling so will pack in, surely my ten lines are complete?

Storyline:On his way up north to visit friends, BEN picks up a mutual acquaintance, SAM, from her apartment in the city. Instead of taking the Interstate, they both agree for the longer but more scenic coastal highway...

Storyline:A group of friends reunites after many years to resolve an unsolved disappearance from their youth. The group must overcome the cynical worldview they have developed in their many year absence to remember th...

Storyline:A unique story of friendship, race, and self-discovery, WELCOME TO PINE HILL was born out of a chance encounter between filmmaker Keith Miller and star Shannon Harper, who found themselves fighting over a lo...

Storyline:For over thirty years, Brooklyn-born photographer Jamel Shabazz has documented New York street life, most famously in his legendary images of the early hip-hop scene, collected in his book "Back in the Days....

Storyline:THE NOTEBOOKS is an inspiring film about friendship, love, and hope. When Preston Walker suddenly finds himself forgetting his memories, he puts a game plan in place to help him remember all of his life's gr...