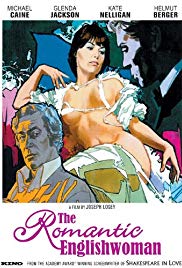 Storyline:
What is real and what is fiction? Faced with writer’s block with his novel, Lewis Fielding turns to a movie script about a woman finding herself after his wife Elizabeth returns from Baden Baden. She didn’t quite find herself there, but had a brief encounter in an elevator with a German who says he is a poet. Now the German is in England, gets himself invited to tea where he claims he admires Fielding’s books. Which one does he like the best? “Tom Jones”. Amused at being confused with the other Fielding, the novelist works the German into the plot.
Written by
Dale O’Connor <[email protected]>
User Reviews: I used to avoid Joseph Losey, believing him to be just a b-s artist. I’m halfway through watching this film and before Losey disappoints me, which he maybe (or maybe not???) will, I would like write something positive about him, because this film is, so far, a pleasant surprise. It’s about so called "jealousy", maybe not very analytic as to the reason why we are jealous or what it means in different ages and sexes. However, it is very much to the point and very descriptive about the process of being jealous as far as the male goes.

The film has, so far (I’m currently watching the 62nd minute of it), made me laugh out loud, I think, twice. It has also shown Glenda in the buff and what a bushy buff! So there I got my money’s worth right there and could go on watching more relaxed in that department.

Michael Caine is, like so often, superb. Glenda is superbly bushy (forgive me for repeating myself) and Helmut Berger is Helmut Berger, like he always is and I would never go to see a film just because he’s in it (as opposed to Caine).

Incidentally, I don’t know whether Stanley Kubrick saw this film but there are scenes in Eyes Wide Shut, when Tom Cruise imagines Nicole Kidman with another man, that is very similar to scenes in this film.

Well, if he (Losey) does not disappoint me in the end I guess I will have to re-watch some of his stuff (the Go Between wasn’t so bad, by the way).

So, I saw it all and, yes, Losey did disappoint at least a little. He just cannot let it be, I guess. Or, which is more likely, he does not look too deeply into things. Nevertheless, this one is less disappointing than most of his work but it take the urge of a re-watch out of me.

You see, it’s like this: infidelity means totally different things for men and women in this society that is being pressed down our throats. It also means different things in different ages of life. This society takes very lightly on the humiliation of the poor and expects the poor to take about just every disgrace possible believing it to be something else.

Women are pressed to manage to fight the right man as breeder and/or provider within a very short period of time, getting shorter when they are also supposed to have a career. Biologically, if the woman has a provider, she may still be doubtful about whether he is a good breeder or, more precisely, whether he has the proper genes to produce children that are attractive and can breed in turn, thus spreading her genes. If she has a breeder but no provider, she will look for that so that the children may reach adulthood safely and, again, be able to spread her genes.

The man, biologically, will have the urge to breed with as many women possible in order to get a large number of kids, not necessarily providing for any of them.

Now, providing for another man’s children is not very wise for the man who wants to spread his own genes and therefore biologically humiliating. Therefore the jealousy of men.

Now, loosing provision for her children to another woman, is not very biologically smart for a woman, who needs protection of her children. Therefore the jealousy of women.

A woman betrays with her body, a man with his money to other women. A married man who uses other women without paying for them, will not give rise to much jealousy in his wife, unless she is getting older as well as her husband, who, when using other women may threaten to leave her some day. A woman who goes with other men will however always give rise to jealousy in her husband unless she is too old to get children and not very attractive to her husband. He will only get jealous for her companionship in this case, provided that he cares for it.

We, the people, used to know these things but through the propaganda of power, in which, sadly, even Losey in this film plays a part, we have gotten confused in these matters and jealousy has become a dirty word, when, in truth, it is just a healthy reaction on humiliation!

Storyline:Sir Sidney Ruff-Diamond looks after the British outpost near the Khyber Pass. Protected by the kilted Third Foot and Mouth regiment, you would think they were safe. But the Khazi of Kalabar has other ideas. ...

Storyline:Sid and Bernie keep having their amorous intentions snubbed by their girlfriends Joan and Anthea. The boys suggest a camping holiday, secretly intending to take them to a nudist camp. Of course they end up i...

Storyline:A group of holidaymakers head for the Spanish resort of Elsbels for a 4-day visit. When they get there, they find the Hotel still hasn't been finished being built, and the weather is awful. And there is some...