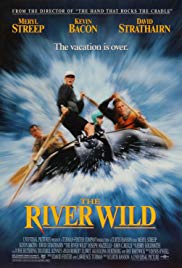 Storyline:
The teacher Gail Hartman is facing problems with her marriage with her husband, the workaholic architect Tom Hartman. On the birthday of their son Roarke, Gail decides to leave her daughter with her parents and take her family to raft down a wild river where she was a guide. On the departure, a young man named Wade befriends Roarke and leaves the place with his friends Terry and Frank. Later the family encounters Wade and Terry, who do not have rafting experience, and Gail helps them to cross a whitewater. They get closer to the family and soon Gail and Tom learn a dark secret about Wade and Terry. What will they do to get rid of the men?
Written by
Claudio Carvalho, Rio de Janeiro, Brazil
User Reviews: For a conventional Hollywood adventure story, THE RIVER WILD isn’t bad at all. While it lacks the rawness of similarly-themed independent fare and the kind of twists and surprises you’d expect from the best this genre has to offer, it tells the story it sets out to tell with a large amount of success, mainly thanks to the lean script and no-nonsense pacing. Much of the action comes from a series of spectacular white-water rafting sequences in which the stunt team are really put through their paces. These mark the film’s highlight. The human plot, involving a couple of hostage-takers, is less spectacular, but the film still gets by thanks to the calibre of the cast.

Meryl Streep, although a little too earnest in some places for my liking, takes plaudits as the outdoors expert who has to use her wits to survive both nature and the evils of mankind. Kevin Bacon and John C. Reilly are fine as the no-good criminals, and Benjamin Bratt bags a nice little role as a good-guy ranger. Youngster Joe Mazzello is a more mature presence than in the previous year’s JURASSIC PARK, and David Straithairn (THE BOURNE ULTIMATUM) gets to have some fun as the straight-laced father forced into becoming a hero. Okay, so you know the outcome from the outset (and in a 12-certificate family adventure nothing THAT bad is ever going to happen), but this is nonetheless a mildly entertaining little movie.