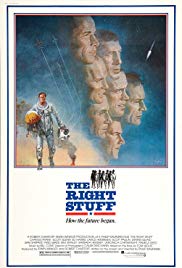 Storyline:
Tom Wolfe’s book on the history of the U.S. Space program reads like a novel, and the film has that same fictional quality. It covers the breaking of the sound barrier by Chuck Yeager to the Mercury 7 astronauts, showing that no one had a clue how to run a space program or how to select people to be in it. Thrilling, funny, charming and electrifying all at once.
Written by
John Vogel <[email protected]>
User Reviews: It was wonderful to see again this 1983 gem. Just as I remembered plus those unexpected surprises that time puts in evidence. Kim Stanley for instance. A few minutes on the screen, a peripheral character but I took her with me and here I am, thinking about her. The "starry" role jet pilots played and that new breed: "tha astronauts" getting the all American treatment, becoming overnight celebrities. Ed Harris is extraordinary as John Glenn. He becomes a sort of leader with some TV experience and we never ask why. Ed Harris’s performance explains it all without ever actually saying it. Dennis Quaid is irresistible as "Gordo" Cooper. You believe every one of his thoughts, specially the ones he never reveals. In spite of the film’s length, I wished the film would not end. I haven’t had that wish very often. "The Right Stuff" is the real thing.

Storyline:Emmy winner Bob Odenkirk (Better Call Saul, The Post, Nebraska) stars as Hutch Mansell, an underestimated and overlooked dad and husband, taking life's indignities on the chin and never pushing back. A nobod...