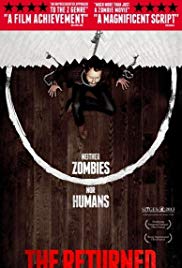 Storyline:
In a world where a deadly zombie virus has infected mankind, a single cure has been found. The cure, a treatment called the “Return Protein” which stays the effects of the virus in its host. With injections every 36 hours, the “Returned” are able to live as though they were never bit, despite the virus still coursing through their veins. When it is discovered that the protein stock is running low, chaos hits the streets. Returned who run out of the protein turn to zombies and wreak havoc, protesters turn to murderers as they try to rid the streets of the returned, and right in the middle of it all are Alex and Kate. Kate a leading doctor in the field of zombie virus’ and Alex a musician with a dark secret, he is a Returned. As death and fear run rampant, Alex’s secret becomes known and his dosage runs low, he and Kate must fight for a chance to live before he becomes a zombie.
Written by
Uncork’d Entertainment
User Reviews: It was the cover for this movie that initially caught my interest, as anything involving zombies does. So of course I had to give this movie a go.

And I will say, now that I have seen it, that it does bring some new energy and a whole new approach to the zombie genre. This is not your average shambling zombie movie where everyone is devoured in a galore of ghastly gore and blood. No, this is more intellectual approach to the genre.

The movie is about a strange virus that infects people with an odd disease, that if left untreated and not kept in check by a special serum, then those infected will turn into ‘zombies’ (in lack of a better word). However, this serum can only be extracted from a dying infected person, and as such, the amount of serum is short and time is running out for those infected.

If you enter this movie with the hopes of this being a bloody gore movie, then you will be sorely disappointed. There is very little of that, and there are no decaying, shambling zombies about to be found. But even with the lack of that (stereotypical aspect of the zombie genre), then "The Returned" turned out to be a really entertaining movie, and a nice breath of air to the genre.

Now, I assume that "The Returned" is not suitable for just anyone, but watch the movie with an open mind – pardon the pun – if you enjoy the zombie genre, because the movie is actually quite good.

The cast hired for the various roles were doing great jobs with their given roles. Especially Kris Holden-Ried who played Alex, he really carried the movie so nicely.

But all in all, then "The Returned" is a well worthy addition to the zombie movie genre for its originality and different approach to the genre.

Storyline:In their hometown of Hirosaki, Aomori Prefecture, Akinori Kimura (Sadao Abe) and his wife Mieko (Miho Kanno) open an apple orchard. Because of Meiko's allergic reaction to pesticides, without the help of che...

Storyline:It's Christmas and Zip and Zap are up to their old tricks. But this time they've gone too far and their punishment will be no Christmas vacation and a seemingly boring boat trip with their parents instead. T...