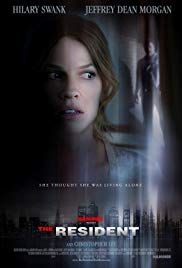 Storyline:
In New York, Dr. Juliet Bliss Devereau of the Brooklyn General Hospital has ended her relationship with her boyfriend Jack and is seeking an apartment in Brooklyn to live alone. She finds a bargain in an old apartment building owned by the handsome and lonely Max and one night she misinterprets his signals and dates him. However she concludes that it is too soon to have a love affair… but is that really the end of it?
Written by
Claudio Carvalho, Rio de Janeiro, Brazil
User Reviews: I have put this flick on my list for my birthday but I received it a few months later for Xmas. When opening the package I saw the DVD sleeve and thought, what the hell is this, this isn’t horror but when I turned over the box I saw the name Hammer. Then I knew why I asked for this flick, face it, Hilary Swank isn’t a name that you came across in the genre.

I think that I don’t have to explain the history of British horror in particularly Hammer Studio’s. They were broke back then in the days when Gothic horror was over and the slashers came in. Hammer was known for Gothic and after a while nudity. Hammer was also known for a few names, Peter Cushing and Christopher Lee. Cushing past away in 1994 but Lee is still alive and let him be in this Hammer production. So the link was pretty quick made, this could be a new Hammer classic.

Naturally people think that Hammer would go back to memory lane but they didn’t. It’s an up-to-date flick that deliver some creepy moments. It isn’t bloody at all but it is something that could happen to you. But what makes the movie is indeed the face of Lee. He isn’t that much in it but his face still can deliver some nasty looks. On the other hands the main parts were played by Jeffrey Dean Morgan who we knew from Watchmen (2009). He really did an excellent job and was believable but the biggest surprise came from Hilary Swank. I only have seen her in Clint Eastwood’s Million Dollar Baby (2004) and the flop The Black Dahlia (2006) and by that she wasn’t really knew to me as a scream bird. But look what she did here, she’s playing the naive bachelor coming out of a relation and moving into the big city NY. She falls in love with her landlord but after a while she guesses that things aren’t what they look like.

The first half hour is really getting to know the characters and again Hilary surprised me by going full nudity. There is even a close-up of her underwear were it was clearly to see how she shaved her pubic hair. Just when she’s going for it with her landlord the movie flashbacks to the beginning of the movie and from that point it goes wrong with her.

It’s a bit low on everything but the acting makes it watchable. It’s a flick that goes from a love story were you really get involved with the characters towards a nasty flick. There is a bit of blood in it at the end but don’t think that you will see a slasher or a return to the old Hammer flicks. It’s a bit like The Stepfather or Single White Female.

I won’t forget this flick due Hilary’s performance and naturally as Hammer putting themselves back on the map.