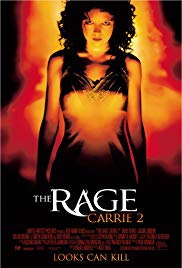 Storyline:
After the suicide of her only friend, Rachel Lang has never felt more on the outside. The one person who reached out to her, Jessie Ryan, also happens to be part of the popular crowd that lives to torment outsiders like her. However, Rachel has something else that separates her from the rest, secret amazing powers to move things with her mind. Sue Snell, the only survivor of Carrie White’s rampage 23 years ago, may hold the key to helping Rachel come to terms with her awesome, but unwanted powers. But as Rachel slowly learns to trust, a terrible trap is being laid for her, and making her angry could prove to be deadly.
Written by
Anthony Pereyra {[email protected]}
User Reviews: What ‘will I ever learn’? Never judge a book by its cover, a film by its trailer, a story by the ‘critics’. Well, some of them anyway.

The trailer to this movie did NOT appeal to me. Some of the critics trashed it. Even the box to the actual tape/DVD looked ‘cookie-cutter’ to the first Carrie. I hate redone classics, therefore, I avoided this movie like the plague for the longest time. Indeed, I ran the opposite direction when this movie came near me. Well, maybe thats going a bit far.

LOW AND BEHOLD!! Last night (7/5/2002) USA network showed this movie, and nothing else was on. I had a bottle of Jose Quervo on hand; just in case. I sat down and got ready to laugh at, tear apart and rag on this flick. After all, its my job as a film buff to see even the ‘bad’ films in order to better appreciate the ‘good’.

I was utterly surprised by this film. There was a character played by Mena Suvari… a pleasant surprise to me- that I thought surely would be the ‘new and improved Carrie’. Oops, now I’ve gone too far. ANYWAY! I actually enjoyed this film. I felt very bad for the character’s treatment by others, as well as, herself.

That’s all I’ll say on the content of the movie since there may be those out there who’ve avoided this film like I did. DON’T!! This movie put me in my place on pre-judging films. I felt entertained and the piece was well-done. I can’t think of anything wrong with this movie; right now. Perhaps, it was a bit on the teen-film stereotypical side, but I just really enjoyed watching this film. Thank you for your time o<;O) Skot