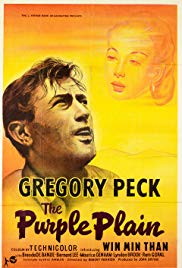 Storyline:
After losing his bride in a Luftwaffe air raid, bomber pilot Forrester becomes a solitary killing machine, who doesn’t care whether he dies. The reckless Canadian pilot is both admired and feared by the rest of his squadron in World War II Burma. The squadron physician is assigned to determine the embittered Bill Forrester’s fitness for duty. To break through the nightmare-haunted man’s wall of silence, the physician drives Forrester to visit an outpost of English-speaking refugees, which includes an alluring young Burmese woman.
Written by
David Stevens
User Reviews: Purple Plain is an obscure film in Peck’s long list of movie credits. I don’t know if this British production got much publicity or release stateside, despite Peck’s movie star celebrity. Unfortunately, it’s never been a TV regular, which is too bad because this tale of renewal and survival is an unusual and gripping one, in spite of the obscurity.

The film opens in the Burmese jungle during WWII. Peck is a battle fatigued flyer on the ragged edge of breakdown. He’s about to be relieved because of erratic behavior, all the while he’s flashing back on his wife’s death in a London air-raid. These are well-done scenes causing us to sympathize with his loss. Nonetheless, he’s jeopardizing his comrades with reckless manuevers because the loss has undermined his will-to-live. Thus, we’re torn between sympathy and concern, just like the flight station doctor (Bernard Lee).

In an interesting move, Lee overcomes Peck’s agonies by reconnecting him socially, in this case with a nearby missionary community. There Peck finds the vital human relationships so importantly missing from his death-dealing combat duties. As a result, his life takes on new meaning and purpose as a result of rejoining a human community where such life-giving affirmations can emerge. On the whole these are well-done scenes, especially the chaos from the Japanese air attack. In the midst of the carnage, Peck’s combat flyer finds a new role in helping to bandage up survivors. Herein lies the movie’s basic message and it’s an important and humane one, conveyed in fairly subtle fashion, though the turn-around occurs more quickly than I would have liked.

Nonetheless, it’s interesting that the script avoids the usual officially sanctioned head-doctor therapies. Note that Peck is not sent to be counseled by an air force psychiatrist, nor to join a chest-baring therapy group, nor to have his past puzzled together Freudian style. Of course, the happy solution here remains a "movie" solution where– as we all know– anything can be made to magically happen. Still, for a war-movie setting, the simple affirmation that mental health lies through nurturing social relations and not through government sanctioned killing remains no less suggestive because of its movie origins.

The remainder of the film amounts to a survival trek through the wilds of southeast Asia. It’s a well-filmed and harrowing struggle against a forbidding landscape where the crash survivors must decide between staying put or hiking out against great odds. But most importantly, it’s Peck’s chance to regain his humanity by facing up to the odds, not just for his own survival, but for his two comrades as well. The movie’s final scene could not have been better conceived. Indeed, no words are necessary. On the whole, this is a subtly and well thought out anti-war film, no less effective because it concerns the fate of one man rather than thousands.Too bad that its humane message remains so generally unseen.

Storyline:Three years after the end of the Apache wars, peacemaking chief Cochise dies. His elder son Taza shares his ideas, but brother Naiche yearns for war...and for Taza's betrothed, Oona. Naiche loses no time in ...