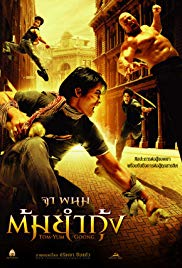 Storyline:
In Bangkok, the young Kham was raised by his father in the jungle with elephants as members of their family. When his old elephant and the baby Kern are stolen by criminals, Kham finds that the animals were sent to Sidney. He travels to Australia, where he locates the baby elephant in a restaurant owned by the evil Madame Rose, the leader of an international Thai mafia. With the support of the efficient Thai sergeant Mark, who was involved in a conspiracy, Kham fights to rescue the animal from the mobsters.
Written by
Claudio Carvalho, Rio de Janeiro, Brazil
User Reviews: Had the opportunity to watch Tom Yum Goong at a local cinema here in Bangkok on opening night. Expectations were high, and the movie fulfilled them in both good and bad.

The action was some of the best caught on film (do they still use film?) that I have ever seen. Panom "Ja" Yeerum again showed that with his background of Muay Thai, gymnastics and stuntman work, he can deliver action scenes that are graceful and brutal at the same time, and will have the audience picking up their jaws from the floor at times. They don’t use gimmicks like strings or special FX, so everything you see him do is stuff he really does. Except maybe one flying knee where he literally flew about 5 meters into the guy so he must have been launched off something.

However, as good as the action was, the obvious comparison would be to Ong Bak (same lead, same director). And as amazing as TYG’s action scenes were, they didn’t have the raw power that Ong Bak delivered. I think this may be because of different stuntmen – in Ong Bak, a lot of the people that got beaten up were probably amateur Thai stuntmen or retired muay thai dudes (scene in cave, for example) who don’t mind taking a very heavy kick or punch to make a few Baht and be in a movie. So the impacts were very hard and very real in Ong Bak, and it made the action that much more "in-your-face". In TYG, due to the action taking place in Australia and the higher production values, the stuntmen didn’t seem to get beaten up as badly. Sure, it was still better than any other action movie besides Ong Bak, but not quite as raw and powerful.

Then… the plot. The plot has already been criticized by many, and obviously it is full of holes, unintentional humor (unless there really is an English-language news channel in Australia where the newscaster has a strong Thai accent?) and so on. But it was nowhere near as bad as Ong Bak. Ong Bak really is a "fast forward to the action scenes" type of movie, whereas Tom Yum Goong is a watchable movie in its entirety. The first 15 minutes have barely any action at all, but the elephant scenes and the beauty of rural Thailand were beautifully shot and the actors did a surprisingly good job – both Panom and the guy who played his father. It seems that Panom’s acting classes have paid off. Now if only he can learn passable English, he’ll really have a chance of becoming the next big thing in Martial Arts action movies.

The (intentional) comic relief was much better than in Ong Bak – Mum Jok Mok plays a Thai policeman in Sydney. How he got to be Sergeant there, we’ll never know, but he has a few funny lines – most of which are much funnier to Thais or people who know Thai culture than to the international audience. Like the "…. oh, oh, oh – and Laos!" line. More laughs came from cameos like the Jackie Chan lookalike at the airport and Sek Loso drinking M150 on the street in Sydney. Not so much product placement as an inside joke ("go inter") for the Thai audience.

Getting the audience to cheer for the hero in an action movie obviously requires a nasty villain or a group of villains. Tom Yum Goong does well in this regard as well – both the Thai mobsters and especially their bosses in the Asian mafia in Sydney are an interesting, suitably detestable bunch. Also their "bodyguards", from the Capoeira guy to the three huge Caucasians in the end, are very good opponents for Panom "Ja" to beat up on. Furthermore, having the motivator be elephants (respected animals, and to Kham, family members) instead of a stolen head of a Buddha statue (like in Ong Bak) works much better, especially for non-Thai audiences. Good acting by the baby elephant in one early scene in the movie, by the way! Deserving of an Animal Oscar.

To sum up, Tom Yum Goong has a decent plot, a good cast with better acting than was to be expected, good cinematography, and of course, plenty of cracking, beautifully choreographed action that will not fail to impress any Martial Arts action movie enthusiast.

Highlights: Kham learning how to fight the Capoeira guy in a very well choreographed scene, and the bone-crunching extravaganza that was like Kill Bill Vol. 1’s restaurant scene without the swords.

An excellent achievement in its genre. A whole lot of fun. 9/10.

Storyline:A Marine veteran working as a school janitor tries to mend his relationship with his son after a divorce. When his son is killed by a police officer found innocent without standing trial, he takes matters in...

Storyline:When Andrew Sterling, a successful black urbanite writer buys a vacation house on a resort in New England the police mistake him for a burglar. After surrounding his house with armed men, Chief Tolliver real...

Storyline:After learning that a group of doctors were killed by super natural forces, Fathers Salvador and Benedicto will have their faith tested when they are tasked to perform an exorcism on a possessed woman named ...

Storyline:Near the Texas-Mexico border, Wendell Baker has a few things going for him: his genial nature and optimism and the love of Doreen. His troubles? He dances around telling her that he loves her, and his idea o...