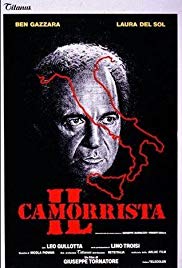 Storyline:
Vaguely inspired to the real story of boss of the Camorra’s bosses Raffaele Cutolo, this is the story of the criminal career of “Il professore” (the professor). He is in prison, and by there he is able to build, step by step, an empire founded on murders and drugs. He starts a war to destroy all the old Camorra bosses and becoming the new “boss of the bosses”. With his sister’s help he manages to evade from prison and escape in New York. Here he starts immediately a new relationship with “Cosa Nostra” (Italian American Mafia). He is going to seat on the peak of the most powerful criminal organization, and the Italian authorities are almost impotent.
Written by
1felco
User Reviews: The Italian mafia is the world’s best known one but yet it always had been the Americans who made the best mafia movies, involving Italians. This movie however shows that also Italians themselves are capable of making a good mafia movie.

The director Giuseppe Tornatore made his debut with this movie. He would go on to make world wide well known Italian movies such as "Giuseppe Tornatore" and "La leggenda del pianista sull’oceano". He’s actually one of the best directors at the moment that Italy has. For a debut movie this one is also certainly a great one.

I think that it’s really foremost due to its professional directing approach that makes this movie such a great one. It’s not really done typically European style and it has a way more professional look and feel over it than most other genre attempts, made in Italy itself.

The story is quite good and loosely based on some true events and characters. You could say that the movie is being a bit overlong at times but this was probably also due to the fact that this movie was initially intended to be an 5 hour TV-movie, which no doubt would had aired in different one hour parts or so. Luckily the movie is not being that long now to watch but still it’s almost three hours long and not always being good enough to hold your interest throughout.

Ben Gazzara is a good actor and is perhaps best known for his Hollywood work but I’m still not too sure if he best the best choice for this movie. Perhaps he just appeared too friendly to me to look at him as this big though mafia boss who is building his empire and pulling the strings on all sides. Still his acting qualities compensate a lot.

A pretty good unknown mafia movie, from one of Italy’s best directors.

Storyline:A man is falsely charged with bank robbery, prompting his brother to break him out of prison. Together the pair set out to find the real culprits, and their search leads them to a gang of outlaws headed by a...

Storyline:At Alfea College, Stella, Aisha, Flora, Musa, and Tecna all graduate and become fairy guardians of their home planets. But, Bloom must watch graduation from the sidelines. The Winx try to save Bloom's parent...

Storyline:Story about a young boy who make friends with a baby shark. He introduces the shark to his girl friend and the shark is his pet. A decade later they reunite and now they are husband and wife and the shark be...

Storyline:A gambler very much in debt, sets his cap for a beautiful woman, not knowing that she is also penniless.User Reviews: A continental dream team of Marlene Dietrich and Vittorio DeSica team up for Montecarlo a...

Storyline:Teresa is a nurse and does not have an easy life: her husband plays poker and the father organizes the illegal lot among the sick.User Reviews: