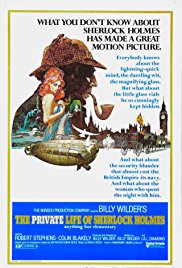 The Private Life of Sherlock Holmes (1970)

Storyline:
Director Billy Wilder adds a new and intriguing twist to the personality of intrepid detective Sherlock Holmes. One thing hasn’t changed however: Holmes’ crime-solving talents. Holmes and Dr. Watson take on the case of a beautiful woman whose husband has vanished. The investigation proves strange indeed, involving six missing midgets, villainous monks, a Scottish castle, the Loch Ness monster, and covert naval experiments. Can the sleuths make sense of all this and solve the mystery?
Written by
Joel Preuninger <[email protected]>
User Reviews: Sherlock Holmes is certainly one of literature’s all-time most famous characters, the subject of countless novels and short stories by Sir Arthur Conan Doyle between 1887 and 1927. Since then, he has become possibly the most portrayed movie character in cinema history {according to the Guinness Book of Records, over 70 actors have played the coveted part in more than 200 films}. So rich was Conan Doyle’s description of Holmes that many readers have come to think of him as a historical figure, and derive enjoyment from speculating on the finer detail’s of the private detective’s life. Likewise, many authors and filmmakers have decided to expand on the stories of Sherlock Holmes, creating new mysteries that perhaps Dr. John Watson forgot to publish. ‘The Private Life of Sherlock Holmes (1970)’ is such a tale, directed by master filmmaker Billy Wilder, who also produced and co-wrote {with long-time collaborator I.A.L. Diamond} the film.

‘The Private Life of Sherlock Holmes’ was originally written and filmed as a three-hour roadshow picture, an episodic compilation of Sherlock Holmes’ most difficult mysteries. Unfortunately, the studio’s unwillingness to take a risk with such a format meant that entire sequences, including a prologue with Watson’s grandson in London, and a flashback to Holmes’ university years, were inharmoniously cut from the film. Though I was initially unaware of this studio intervention, I met these findings with anger and frustration; while the surviving picture is merely a good film, Billy Wilder’s original vision would certainly have been something special. I hear that at least one episode has been restored into later DVD editions of the film, but most of the missing footage remains, devastatingly, permanently absent. The story, as we now find it, is comprised of two unequal portions: the first concerns Holmes’ interactions with a glamorous ballet dancer (Tamara Toumanova), casting doubt on the famous detective’s sexuality, while the second mystery demonstrates the efforts of Holmes and Watson to locate the husband of an beautiful woman (Geneviève Page) suffering from amnesia.

When little-known British actor Robert Stephens first appeared on screen as Det. Sherlock Holmes, I wasn’t certain that he was the suitable man for the job {Wilder had initially considered Peter O’Toole as Holmes, and Peter Sellers as Watson, before deciding to cast unknowns}. However, despite initially appearing too flamboyant to play Conan Doyle’s brilliant investigator, I’m happy to say that, by the end of the film, he had well-and-truly grown on me. While Stephens didn’t quite match the stories’ depiction of Holmes, this is only because Dr. Watson’s dramatisations often tend to embellish the truth and misrepresent facts about the detective’s personality and demeanour  a point that is alluded to early in the film itself. Colin Blakely, though given very little to do, is a lot of fun as Holmes’ companion and biographer, playing the role a lot less serious than I’ve seen it done in the past. Christopher Lee also appears as Holmes’ intellectually-equal brother Mycroft, whose associations with the British government may prove crucial to the case being investigated.

Storyline:The time is the seventeenth century. The beggar Maryna Schuchová hides the Host in her scarf at the Communion. She admits to the parish priest Schmidt that she intended to give it to the midwife Groerová to ...