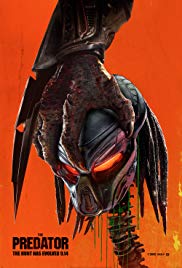 Storyline:
From the outer reaches of space to the small-town streets of suburbia, the hunt comes home. Now, the universe’s most lethal hunters are stronger, smarter and deadlier than ever before, having genetically upgraded themselves with DNA from other species. When a young boy accidentally triggers their return to Earth, only a ragtag crew of ex-soldiers and a disgruntled science teacher can prevent the end of the human race.
Written by
Twentieth Century Fox
User Reviews: ‘The Predator’ is pure fan service for 80s moviegoers.

It’s everything you knew it WOULD be and nothing you imagined it COULD be. It delivers what is expected in hefty doses, but it fails to become anything of greater substance. It’s amusing and violent and funny, but it is also ultimately empty and forgettable.

There’s a joke a minute, and at times the movie seems more concerned with one-liners than actually constructing a coherent story. To be fair, many of the jokes do land, but they do so in a way that meanders from what matters in each scene, so they end up serving as distractions. Much of the film consists of loud, violent (and a share of humorous) distractions that certainly entertain but don’t do much else. And maybe that’s all director Shane Black was looking to make-a fun, disposable movie that fans will forget shortly after leaving the theater.

Black clearly wasn’t attempting to make something that he wanted to be taken seriously. It’s too silly for that. There are mountains of both intentional and unintentional comedy littered throughout. At times, it’s difficult to tell which is happening. The special effects are laughably bad in certain instances, but maybe that was a nod to the original? Again, it’s difficult to tell.

There’s also an outrageous claim about the next step of human evolution that is simply passed off as plausible even though it is the exact opposite of plausible.

I haven’t even mentioned the plot yet because it’s hardly relevant. But here’s the gist: a group of soldiers encounter a predator on Earth, and it kills everyone except the one truly excellent soldier, who subsequently steals the predator’s gear. An accidental misuse of the gear signals another predator to come to Earth. So now we have two. And the second one is a BEAST. Predator 2.0. Then yada yada, the humans fight the predators and what not.

The plot doesn’t matter much. This is about the spectacle. The spectacle puts on a decent show, but it’s not nearly as impressive as it needs to be. So, ultimately, you’ll walk away with an empty feeling, wishing this movie had tried to do more.

Storyline:Twelve-year-old Itan's promising life in San Francisco is turned upside down when she comes home from school, with her younger brother, to find her mother missing. Suddenly she must rely on her estranged unc...

Storyline:A man wanders the streets of Vienna, guided by the memory of a friend who has recently passed away. The vestiges of a once sumptuous empire become the setting for a cinematic elegy and a dark celebration of ...

Undermined – Tales from the Kimberley (2018)

Storyline:Australia's vast and unspoiled Kimberley region is under threat, with mining, pastoralism and irrigated agriculture driving an unprecedented land grab. What will be left of over 200 remote Aboriginal communi...