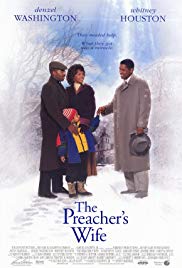 Storyline:
Good natured Reverend Henry Biggs finds that his marriage to choir mistress Julia is flagging, due to his constant absence caring for the deprived neighborhood they live in. On top of all this, his church is coming under threat from property developer Joe Hamilton. In desperation, Rev. Biggs prays to God for help – and help arrives in the form of an angel named Dudley. However, Dudley’s arrival seems to cause even more trouble…
Written by
Jonathan Broxton <[email protected]>
User Reviews: This updating of "The Bishop’s Wife" has much going for it. The cast is just fine, the productional values are on a high level, and the over all intention commendable.

What "The Preacher’s Wife" ends up being, however, is only an average family film. The essential difficulty, as I see it, is in Nat Mauldin and Allan Scott’s screenplay.

Their script seems to lack a keen sense of structure, with too many highs and peaks, often via musical performances, which emerge inserted and bloated rather than integral and balanced.

The decision to provide Whitney Houston with full-scale musical numbers tends to more distort than enhance the film’s focus. After some rip-rousing bring-down-the-house gospel fests, it seems like the end credits ought to start rolling . . . instead the play goes on anticlimactically.

Director Penny Marshall might have stepped in and ordered some sharp editing to tighten matters up and shape the film into an effective dramatic form. For this seems to be not a musical, but a light comedy/fantasy with a few incidental music interludes.

How wonderful to see the excellent Denzel Washington in a role and film in which he so lovingly believes. He invests his earnest effort into making this a winner, and he’s most ingratiating in the part. Houston makes a nice costar, and the entire cast is delightful.

There’s much to enjoy in "The Preacher’s Wife," and there are some mighty pleasant humanistic expressions to savor and delight in along the way.