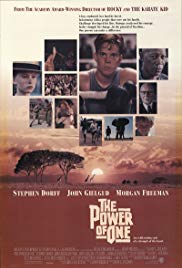 Storyline:
The Power of One is an intriguing story of a young English boy named Peekay and his passion for changing the world. Growing up he suffered as the only English boy in an Afrikaans school. Soon orphaned, he was placed in the care of a German national named Professor von Vollensteen (a.k.a. “Doc”), a friend of his grandfather. Doc develops Peekay’s piano talent and Peekay becomes “assistant gardener” in Doc’s cactus garden. It is not long after WWII begins that Doc is placed in prison for failure to register with the English government as a foreigner. Peekay makes frequent visits and meets Geel Piet, an inmate, who teaches him to box. Geel Piet spreads the myth of the Rainmaker, the one who brings peace to all of the tribes. Peekay is cast in the light of this myth. After the war Peekay attends an English private school where he continues to box. He meets a young girl, Maria, with whom he falls in love. Her father, Professor Daniel Marais, is a leader of the Nationalist Party of South …
Written by
Greg Brunson <[email protected]>
User Reviews: wonderful job at making the book (I read that). And for the directing of the film, it was fantastic. Starting with Peekay as the young boy at just 6 or 7 years old, being treated so horribly gives one a different view of life in Africa in the WW2 years. Several differences between the book and the movies, but that is to be expected. If you haven’t read the book already, but you’ve seen the movie, you’ll still feel the power and climatic of this production. Well put by the actors Stephen Dorff, Simon Fenton, Guy Witcher, who all played Peekay; Armin Mueller-Stahl for his peaceful acting of Doc; Morgan Freeman for Geel Pete; Fay Masterson for Maria; and all the rest for making such a tremendous thought-provoking film. A masterpeice telling people what is going on in the world, to get them to act to it. May the world flow with peace and beauty.

Storyline:Idiot or genius? For many the jury has been out on Tommy Little, but he's here to set the record straight. Tommy has refined the art of how not to live - see how truly entertaining that can be in a raucous h...